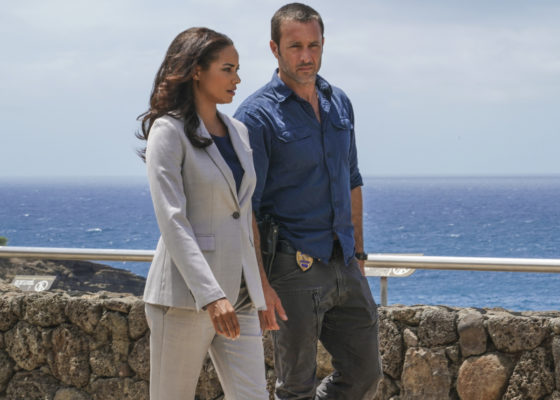 The series finale of Hawaii Five-0 premieres on CBS tonight, April 3rd, at 9 p.m. ET/PT. What can fans expect? In the interview, Lenkov revealed McGarrett (O’Loughlin) will have a happy ending:

When I found out that the show wasn’t coming back, I only had to do some minor tweaks because it really did feel like not just the ending for McGarrett but the ending of the series. I’d always imagined the task force would continue and I had always imagined that McGarrett’s happiness, his peace of mind would be the end game because he came to the Island with such trauma that I wanted him to be able to go off into the sunset with some kind of peace.”

Lenkov later said he hopes the audience will be satisfied with the ending of Hawaii Five-0:

The truth is I am certain that for me I think I did everything I wanted to do [on the show]. I’m sure for our audience, some of the audience, they’ll probably want more and that’s a good thing. But I really left it with feeling like I did everything that I set out to do. I feel really comfortable with the way the show ends.”

And will we ever see the Five-0 task force again? Lenkov said Magnum P.I. may bring on some familiar characters:

I feel very comfortable and confident that Magnum will come back [for its third season] so the plan is to keep the 5-0 task force alive.  A lot of the actors that live there and we’ll try on a regular basis to bring them in and can keep it alive and keep the idea of Five-0 always on the periphery of our storyteller.”

What do you think? Do you watch Hawaii Five-0? How do you want the series to end?

While I didn’t like the original Hawaii Five-O that much, I have loved this version and hate to see it end.

I loved the show. I would love to see it stay on the air with that Lance Gross being the leading guy cuz he’s badass, also keep the same characters cuz they all seem to mesh together and work well together and they look good on the screen together even Scott Cain They should all stay It’s sad to see Alex go but I totally understand why please please please bring the show back.

We have been fans of Hawaii Five-0 for a very long time, we look forward to seeing it every week and will miss it! If there is a way to bring the show back I can assure you we will watch it!

I thoroughly enjoyed the series. I think the show be brought back with a slightly retooled cast!

Did Not Like the ending at All. I Pray it comes back

I was hoping that five o would go on with a new lead person. Will miss McGarrett but am sad to think five o is gone..I don’t watch magnum and don’t intend to so I don’t think that is the answer for keeping some of the Hawaii O characters

Was very disappointed the show ended. Great cast.. hope you make a spin-off

I have been watching Hawaii 50 from day one and I love the show and the actors. Sorry it had to end but it needs to to return