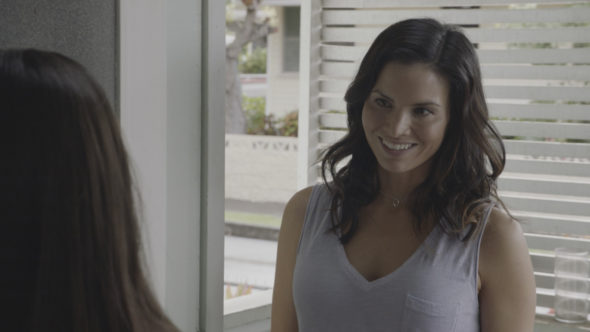 Hawaii Five-0 is getting ready to end its run on CBS next month, and Katrina Law offered some teasers for the special double episode finale in an interview with TV Insider. The actress promised closure for the fans, and the finale will feature at least three returning characters including Steve’s dad and Wo Fat, who are played by William Sadler and Mark Dacascos.

Law revealed the following about the finale of the CBS series:

“The series finale is just action-packed and I’m pretty sure the audience, they’re going to have heart palpitations and then they’re going to cry hysterically. They’re going to cry for many reasons. I think one of my favorite parts about the finale without giving away spoilers is that Peter Lenkov and the writing team really trusted in the actors to take on their own goodbyes. When we did our final scene, there were just tears all around and just a lot of gratefulness so I hope the audience really picks up on that and feels it.”

As for the fans finding closure, Law promised it will happen. Long time viewers of Hawaii Five-0 might even see something they have been waiting for. Law teased the following:

“For the Five-0 fans, there’s never going to be closure because they’re going to want this show to continue on. That being said, I think it’s a beautiful finale and you see people finding closure in their own way. But there is an entire group of fans who have been desperately wanting something for years now, and it’s been breaking my heart to watch them on Twitter and Instagram, and I’m so excited for them, because I think their wish is going to come true and I can’t wait to see their reactions.”

The Hawaii Five-0 finale will air on April 3.

What do you think? Are you sad to see this series long running series end?

I think it is really sad that they are ending the whole show because one/two guys want to leave. The rest of the cast plus the new guy have the talent to keep it going. Mcgarrett and Dano really have not been doing much lately anyway compared to past seasons. I think they only scratched the surface with most of the characters. They could easily put Lou Gover in charge of the squad and keep it going.

I wish h5o will stay little longer like ncis. I haven’t missed an episode of this show. I’m really enjoyed watching this show and I wish cbs cancel other reality show to keep this show. I will be deeply missed this show.

Hi I am so sad
This was my favorite TV show.
I think that it is OK for Steve to go.
Let the new gentle man come in that was joining the last 2 episode. He wil be a great substitute for Steve. To keep the team going

So sad to see Hawaii Five O end. I have always enjoyed the drama, comedy & the family of Hawaii Five O. It still has a place on TV. Call me an optimist but perhaps this show can return to our screens for next season. There is room for quality show. Please listen to the fans!!

Just watched the finale. It was a good episode. But I was disappointed for two reasons. The two predictions that I made (see my earlier post) came true: Steve’s mom left him a fortune in cash and Steve reunited with Catherine. I guess the show’s producer is too predictable after all these years. The was a plot thread left dangling: the champion tool box that Steve’s dad left him. What is the meaning behind its contents? I guess we will never know.

Just finished watching the finale.. I’m crying my eyes out and my husband is upset it’s over.. We both agreed on the way they should end it.. Catherine’s return to Steve.. It happened. And I lost it… After watching for ten years, I felt it should have been a two hour finale revising characters that left.. But loved how they ended it.. Brothers forever and love of Steve’s life with him.. Amazing..Aloha friends

I will miss the show deeply. I’ve looked forward every Friday night. I hate that they keep all the Bachelor and Batcherlotte and such. Why not cancel those shows that are so unhealthy and immorality.

I HATE THEY ARE CANCELING THE SHOW, HAWAII FIVE-O. SHOOT I HATE IT’S GOING OFF!

The best show CBS has created period, so happy it returned so sad to lose it again.

This has been a great show for many years, one that I had always looked forward to watching. The location is beautiful, and the cast is a great group of characters to follow. It’s a sad time when entertaining shows leave the air.

I am so upset and disappointed that Hawaii Five O ended. I believe so many people loved it CBS may be sorry the cancelled it. I feel bad for all the actors and all of us SO many fans. I agree with others you will keep all these reality shows but cancel such an awesome show that was so loved. Makes me want to stop watching CBS!!