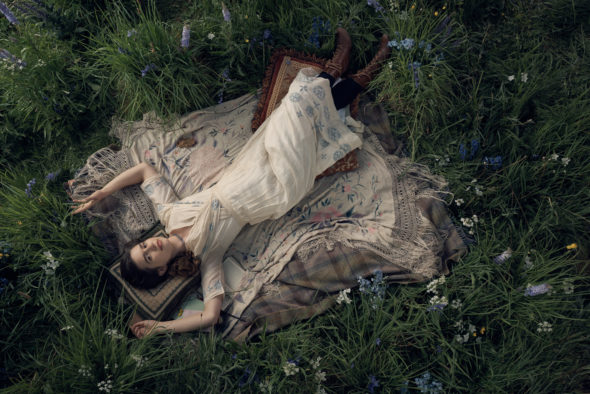 TV show description:
An adaptation of the E.M. Forster classic, the Howards End TV show centers on two unique, self-reliant sisters, as they try to make their way, in a world in flux. Bright and optimistic, Margaret (Atwell) and Helen Schlegel (Coulthard) live in Edwardian London, with their younger brother, Tibby (Lawther), who is a hypochondriac.

Ever since their parents died, Margaret and Helen have lived life on their own terms, at least when they are able to fend off the interference of Aunt Juley (Ullman). Of English and German descent, the Schlegels are both unconventional and progressive. They far more committed to literature, the arts, and culture as a whole, than to the superficial, stifling mores of their day.

After Ruth’s sudden death, her widower, Henry Wilcox (Macfadyen), inherits Howards End — the family’s country home. Although he is a traditionalist, he is nevertheless taken by the confident, opinionated Margaret and realizes he is a better man, because of how she challenges him. Likewise, Margaret realizes her growing attraction to her late friend’s husband.

Since she lives and dies by her passionate nature, Helen is sometimes given to impulsivity. While Margaret is negotiating her relationship with Henry, Helen sets out to help a young bank clerk named Leonard Bast (Quinn).

Leonard is promised to the ailing Jacky (Eleazar), who has led a hard-scrabble life. With aspirations which exceed his station, Leonard is struggling to make his way in the world.

As bonds are forged and broken, and secrets come to light, worlds collide at Howards End.

Series Finale:
Episode #4
Margaret refuses to punish Henry for his past transgressions, committed long before they met one another. Helen unexpectedly embarks on a trip around Europe.
First aired: April 29, 2018.

What do you think? Do you like the Howards End TV series? Should this Starz TV show be cancelled or renewed for another season?

Please renew Howard’s End. I love the now Mrs Wilcox and her brother and sister. After the baby don’t leave us hanging….thanks!

Love this quirky series. So intelligent.

Love this series. PLEASE BRING IT BACK.

I enjoyed this series. Bring back.

I enjoyed this series.

I hope they renew the series it was great!

Amazing cast! Love this show. Hope it is renewed.

We love this show. Please do not cancel it.

Yes I hope and would love it to be renewed