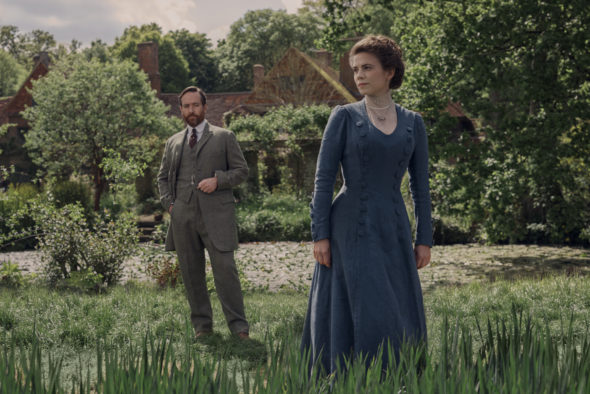 Does Margaret and Helen’s story end here? Has the Howards End TV show been cancelled or renewed for a second season on Starz? The television vulture is watching all the latest cancellation and renewal news, so this page is the place to track the status of Howards End, season two. Bookmark it, or subscribe for the latest updates. Remember, the television vulture is watching your shows. Are you?

The first season of Howards End averaged a 0.04 rating in the 18-49 demographic and 244,000 viewers. Learn how Howards End stacks up against other Starz TV shows.

Will Starz renew Howards End for season two? This is billed as a “limited” series, which can mean mini-series, but doesn’t always. Since this one is based on a novel, one-and-done is the logical conclusion to draw. However, Howards End is originally a BBC series, and it did quite well across the pond. If it draws a big audience in the US, too, that could change everything. For now, I’ll consider it a mini-series and start making dinner plans, but I will still keep an eye on the Nielsens and the trades and update this page with breaking developments. Subscribe for free Howards End cancellation or renewal alerts.
5/1/18 update: The fourth and final episode of the season was designated as the “series finale” so, we have our answer. No season two.

What do you think? Were you hoping that the Howards End TV show would be renewed for season two?

I Totally Loved Howards End and was very disappointed to hear no second season … so much more could be written into this story line , The acting was superb , please give us more !!!

I really got engrossed in the mini series and was left feeling let down by the supposedly final episode. It left me flat. The series had great potential for future episodes. Why would this be the final episode when I have a million questions as to what happened to close it out on such a dour note.

I love Howard’s End!! Wonderful acting and actors! Excellent setting , beautiful cinematography! Don’t want to hear no more seasons!!! Too much junk remains out there—— this is a Diamond! Do something great and bring us a Season 2! Nothing like the Present!!

Very disappointed to read we are limited to only four episodes of Howard’s end.
Great story and acting.

Loved this series..hoping to see a second season.

Please make a second series of Howard’s End! This production was wonderful!

There’s a chance there will be a second season, from what I’ve heard. Also, note that in the UK, “series” is used interchangeably with “season”, so “series finale” can mean simply the end of a season and not the end of an entire series.

Please come back with a season two. For one, I love this time period it is set in. Two, I wanted more after episode 4! I fell in love with it in just 4 episodes! Please bring it back!!!

Absolutely. A beautiful and we’ll made show.

I wanted to watch Howard end I saw bits and pieces of it and I loved it but chasing my grandchild around doesn’t give me time for anything. These beautiful shows are my dream away from reality please don’t take them away.

I hope there will be another season. I feel it is better than the original movie.

I have enjoyed Howards end It is nice to have a program on TV that is exciting to watch, I am not concerned about bad language or inappropriate for the entire family to watch. I I hope it gets renewed and I look forward to Watching additional seasons.