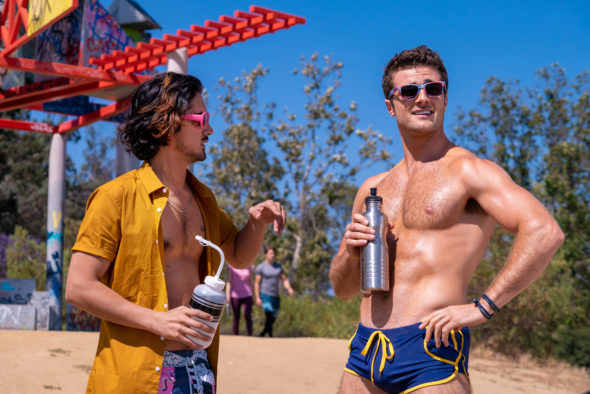 Is it the end of the world? Has the Now Apocalypse TV show been cancelled or renewed for a second season on Starz? The television vulture is watching all the latest cancellation and renewal news, so this page is the place to track the status of Now Apocalypse, season two. Bookmark it, or subscribe for the latest updates. Remember, the television vulture is watching your shows. Are you?

A surreal Starz comedy, Now Apocalypse stars Avan Jogia, Kelli Berglund, Beau Mirchoff, and Roxanne Mesquida. The story centers on Ulysses (Jogia) and friends Carly (Berglund), Ford (Mirchoff), and Severine (Mesquida). In one way or another, each of them is in pursuit of fame, love, and sex, as they try to make their way in Los Angeles. Amidst all of their romantic pursuits, Uly starts to have dreams which strike him as premonitions that something dark and dangerous is really going on — or maybe he’s just smoking too much pot.

The first season of Now Apocalypse averaged a 0.02 rating in the 18-49 demographic and 89,000 viewers. Learn how Now Apocalypse stacks up against other Starz TV shows.

Will Starz cancel or renew Now Apocalypse for season two? The ratings have been very low and the cable channel, after a couple of episodes had aired, decided to release the rest of the first season’s episodes online. I don’t see Now Apocalypse being renewed. I’ll keep an eye on the Nielsens and update this page with breaking developments. Subscribe for free Now Apocalypse cancellation or renewal alerts.

7/26/19 update: Starz has cancelled the Now Apocalypse TV show after one season.

What do you think? Were you hoping that the Now Apocalypse TV show would be renewed for a second season? Are you sorry that Starz cancelled this TV series, instead?

I REALLY ENJOYED THIS SHOW..I DON’T UNDERSTAND WHY THEY WOULD CANCEL IT…AND YES I AM YELLING!!! TO MAKE A 2ND SEASON

May Perun bless us with the cancellation of this show.

There are too many unanswered questions To leave this series As it is. A second season Would be a wonderful thing And I hope beyond hopes That stars does the right thing and gives us a season two, or if not a second season at least a couple more episodes just to tie up the loose ends.

This show is effing amazing, Ill definitely be crying if we lack a second season. Its progressive, colorful, intriguing and very sexy. The actors are spot on, the plot keeps wheeling you in. Please STARZ, we need a second season.

Love this show! Needs another season.

Starz you have a rising hit on your hands. It would be a shame to cut it short before it has a chance to catch on. I myself have just found out about it and watched every episode. they were hilarious! Please give it one more season to allow it to find its audience. You wont regret it. Signed, one more fan of the show.

Definitely a hit with me

The show is great I hope they bring it back

This show is great! It’s got me laughing and questioning. Good mix, it’s got a future.

There are many reasons why I won’t the show to be renewed, but the main one is its very adventitious and abnormal episodes. Unlike, other TV shows, Now Apocalypse gives that anxious and demanding of getting to know what happens next. Also, in every episode, you never know what to expect and that, in my opinion is one of the best features a show has to offer. So, please renew the show, I’m begging you.

All characters are dimensional and interesting. All plot lines are intriguing. Very well acted.
Really want to know what is going on w/ Severine and her research in Roswell.
Really hope they make season 2

I think that that movies series was one of the best I’ve ever seen realistic, suspense imagination hilarious and tear jerking now apocalypse I get five stars.

Definitely make a season 2 of this show!