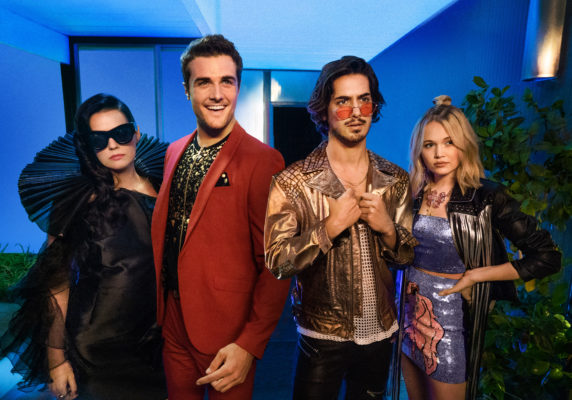 TV show description:
From creator Gregg Araki, the Now Apocalypse TV show is a surreal, coming-of-age comedy. The story centers on Ulysses (Jogia) and friends Carly (Berglund), Ford (Mirchoff), and Severine (Mesquida). In one way or another, each of them is in pursuit of fame, love, and sex, as they try to make their way in Los Angeles and all the bewilderment therein.

A bit of a dreamer, Ford wants to be a screenwriter. He and Uly have been roomies and best buddies since college, and it is Ford who convinced Uly to move to L.A. Sweet sensitive Ford is involved with astrobiological theorist Severine, who proposes they move to an open relationship.

Amidst all of their romantic pursuits, Uly starts to have dreams which strike him as premonitions that something dark and dangerous is really going on — or maybe he’s just smoking too much pot.

Series Finale:
Episode #10 — Everything Is Gone Forever
Uly and Isaac’s relationship disintegrates when Isaac learns about Gabriel. Carly fights with Jethro about her camming. Ford wants to know where he and Severine stand. Carly gets a big career break from the online popularity of her web series. Severine leaves for her business trip. Uly has a disturbing encounter with the homeless dude from his nightmares.
First aired: May 12, 2019.

What do you think? Do you like the Now Apocalypse TV series? Should this Starz TV show have been cancelled or renewed for a second season?

Now Apocalypse is, without a doubt, The most underrated show of the season.

Can’t get enough of it bring it back 4 more

I really have enjoyed the first ten episodes of now apocalypse