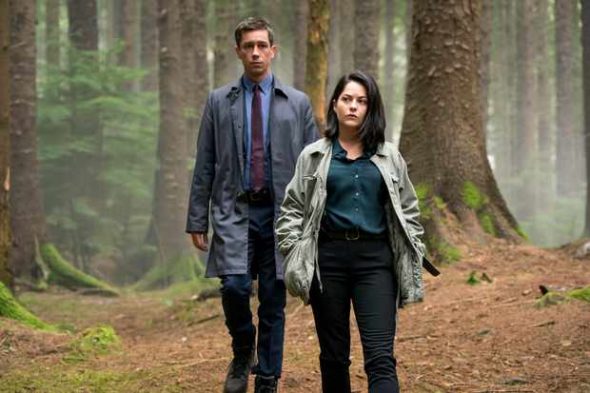 Can Rob and Cassie solve their cases? Has the Dublin Murders TV show been cancelled or renewed for a second season on Starz? The television vulture is watching all the latest cancellation and renewal news, so this page is the place to track the status of Dublin Murders, season two. Bookmark it, or subscribe for the latest updates. Remember, the television vulture is watching your shows. Are you?

Airing on the Starz cable channel, Dublin Murders is based on Tana French’s Dublin Murder Squad series of novels. It stars Killian Scott, Sarah Greene, Tom Vaughan-Lawlor, Moe Dunford, Sam Keeley, Antonio Aakeel, Conleth Hill, and Tom Vaughan-Lawlor. Set during the height of the Celtic Tiger financial boom of the millennium, the story focuses on two murder investigations which are led by Rob Reilly (Scott) and Cassie Maddox (Greene). As the case intensifies, Rob and Cassie’s relationship is tested to the breaking point and when Cassie is sent undercover for another murder case, she is forced to come face to face with her own brutal reckoning.

The first season of Dublin Murders averaged a 0.03 rating in the 18-49 demographic and 239,000 viewers. Find out how Dublin Murders stacks up against other Starz TV shows.

Will Starz and BBC One cancel or renew Dublin Murders for season two? The series didn’t do very well in the ratings on Starz but it’s a co-production with BBC. If it’s to be renewed, I suspect both parties will have to be onboard. I’ll update this page with breaking developments. Subscribe for free alerts on Dublin Murders cancellation or renewal news.

What do you think? Do you hope the Dublin Murders TV show will be renewed for a second season? How would you feel if Starz cancelled this TV series, instead?

Definitely need another series . Was gripped but need more answers and see what frank has to do with it .

I hope it is renewed. Too much has been left unanswered.

Ditto Deb Holdorf wrote. As others have said, we need season 2 to clarify and develop a number of loose strings.

Hoping it is renewed!!

I love this show!! Dublin Murders is the first series in a long while that I keep wanting more of! I love the characters and the story line. There are so many unanswered questions. We need more…I need more!!! You have something good going so don’t end it too soon like a lot of other shows have been done. Please bring on season 2!!!

There HAS to be a season 2. There are too many unanswered questions!! What happened to the children in 1985? Why do we meet Lexi before the deadly car accident? Imaginary friend? Alter personality? Was Cassie’s visit to the women’s clinic to begin prenatal care or to abort? (Who’s the father?) Who was the Lexi that lived with the students? Will Robert/Adam get back together with Cassie? (GREAT chemistry!!) Why did Katie’s mother need sedatives (something her husband jon did! (Has to be more than the rape & cover story-previuosly mentioned!?!) What is in the woods (laughter/bloody shoes/torn shirt) what… Read more »

Would really like to see Season 2 of Dublin Murders, really enjoyed the show alot!!!

Would love to see a season 2 of this series. Still need closure on the original disappearance of the children.

Please renew Dublin Murders. I just had a chance to watch it on Starz, and it’s an amazing, well written show. I loved it! It’s driving me nuts that there isn’t another season to watch of this. I definitely want to see more of this show. Thanks!

Yes for season 2. Hope they do it faithful to books. Faithful Place was better than the first two. I never laughed so hard reading about Kevin Mackey’s wake.