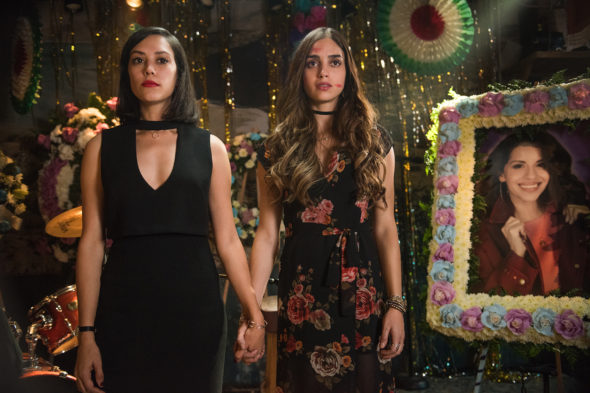 How long will Emma and Lyn stick around the Eastside of L.A.? Has the Vida TV show been cancelled or renewed for a second season on Starz? The television vulture is watching all the latest cancellation and renewal news, so this page is the place to track the status of Vida, season two. Bookmark it, or subscribe for the latest updates. Remember, the television vulture is watching your shows. Are you?

A Starz drama based on the short story, Pour Vida, by Richard Villegas, Jr., Vida stars Mishel Prada, Melissa Barrera, Ser Anzoategui, Carlos Miranda, Chelsea Rendon, and Maria-Elena Laas. The TV series centers on two estranged Mexican-American sisters who are reunited by tragedy. Despite growing up together on the Eastside of Los Angeles, Emma (Prada) and Lyn (Barrera) could not be any more different from each other. Now a successful businesswoman, Emma returns home from Chicago, while good-time girl Lyn arrives from San Francisco. Soon, they’ll have to face things about their pasts, their mother, and even themselves.

The first season of Vida averaged a 0.04 rating in the 18-49 demographic and 130,000 viewers. Learn how Vida stacks up against other Starz TV shows.

Will Starz cancel or renew Vida for season two? The ratings are very low but have shown signs of growth.  I suspect that it will be renewed but Starz could easily cancel Vida instead.  For now, I’ll update this page with breaking developments. Subscribe for free Vida cancellation or renewal alerts.

What do you think? Are you glad that the Vida TV show has been renewed for season two? How would you feel if Starz had cancelled this TV series, instead?

Really .o4 rating, 140,000 viewers, and they canceled ash vs evil dead who had better ratings and a huge following…. we know why it’s not canceled…

Omg I’m hooked! We need more Vida and more!! It reminds me of how every family has their own drama. And I love it!!! STARZ PLEASE DONT CANCEL VIDA I WILL CANCEL MY SUBSCRIPTION TO STARZ IF VIDA GETS CANCELED !

Correction : We need on going seasons of Vida !

Really hoping for another season. I was sucked in from the start. Want to know what happens to all these complicated characters and the neighborhood itself.

I liked Vida and we want to see more than the first season!