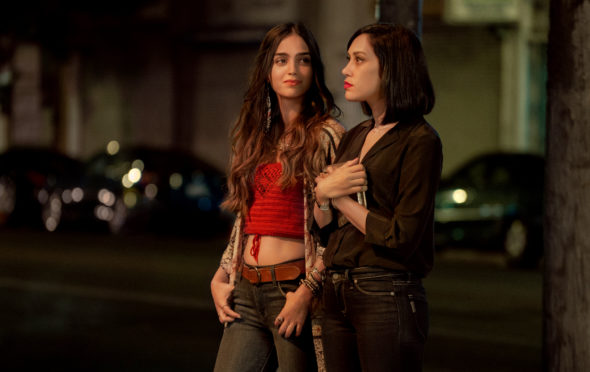 Vida just debuted its second season on May 26th and even though ratings aren’t great, the Starz series has received significant critical acclaim. So far, season two is averaging a .02 rating in the 18-49 demo and only 121,000 viewers.

Take a look at the renewal announcement below:

Santa Monica, Calif. – May 31, 2019 – Starz COO Jeffrey Hirsch announced today that the STARZ Original series “Vida” from Executive Producer and showrunner Tanya Saracho (“How to Get Away With Murder,” “Looking,” “Girls”) has been picked up for a third season.

“It is a rarity in television today to have a series earn this level of critical praise for two consecutive seasons and spark cultural conversation in the way that ‘Vida’ has,” said Hirsch. “We are proud to continue to tell this story with Tanya and the incredible cast and crew she has assembled.”

Winner of the 2019 GLAAD Media Award for Outstanding Comedy series and earning 100% on Rotten Tomatoes for both seasons, “Vida” was created by Tanya Saracho, who executive produces alongside Big Beach TV’s Robin Schwartz, Peter Saraf and Marc Turtletaub with Stephanie Langhoff.

“Vida’s” Hispanic audience has grown 56% compared to the same period in Season 1,* giving it the highest Hispanic audience composition among premium scripted series in 2019 (Live+3).** Additionally, STARZ Hispanic subs have grown 17% since the series premiered in May 2018*** and the number of new customers who watched “Vida” season two on the app in the first seven days was almost double year over year.

“‘Vida’ isn’t special only because it’s putting underrepresented American stories onscreen. It’s special because it’s doing it so well, mining the epic drama and the discrete experiences of its characters’ lives to create something that’s elaborate, distinct, and beautiful all at the same time.” – The Atlantic

In the second season of “Vida,” Lyn and Emma begin the monumental task of rebuilding their mother’s business while navigating financial constraints, competing developers, and the growing anti-gentrification movement. Lyn and Emma must contemplate the relationships in their lives, including their own, and are forced to dig deep to unearth what their mother’s legacy means to them.

Senior Vice President of Original Programming Kathryn Tyus-Adair is the Starz executive in charge of “Vida.”

What do you think? Have you seen Vida? Are you glad it’s coming back?

So happy to read that there will be a third season (hope it’s longer). Compelling characters and great storytelling. Love the addition of Roberta Colindrez this season. Eddy is breaking my heart with her grief too. There should be awards!