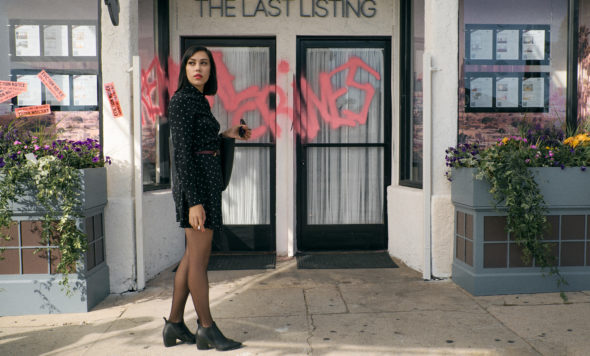 Are Emma and Lyn in a good place? Has the Vida TV show been cancelled or renewed for a third season on Starz? The television vulture is watching all the latest cancellation and renewal news, so this page is the place to track the status of Vida, season three. Bookmark it, or subscribe for the latest updates. Remember, the television vulture is watching your shows. Are you?

A Starz drama based on the short story, Pour Vida, by Richard Villegas, Jr., Vida stars Mishel Prada, Melissa Barrera, Ser Anzoategui, Carlos Miranda, Chelsea Rendon, Maria-Elena Laas, and Roberta Colindrez. The series centers on two estranged Mexican-American sisters from the Eastside of Los Angeles. When tragedy brings them back together, Lyn (Barrera) and Emma (Prada) have to face the truth about their past, their mom, and themselves.

The second season of Vida averaged a 0.03 rating in the 18-49 demographic and 120,000 viewers. Compared to season one, that’s down by 38% in the demo and down by 8% in viewership. Learn how Vida stacks up against other Starz TV shows.

Will Starz cancel or renew Vida for season three? It’s still too early to judge by the ratings, but last year the numbers were quite low and it was renewed anyhow. Since Starz is out to attract paid subscribers, rather than advertisers, they can take chances commercial television can’t afford. For example, this year, they released all of season two on their app, three days prior to the second season’s linear debut. While the Nielsen ratings don’t directly matter to Starz, they do give us some indication of how the network’s shows perform relative to each other. For that reason, I’ll still keep an eye on them and update this page as the season progresses. Subscribe for free Vida cancellation or renewal alerts.

5/31/19 update: Starz has renewed the Vida TV show for a third season.

What do you think? Are you glad that the Vida TV show has been renewed for season three? How would you feel if Starz had cancelled this TV series, instead?