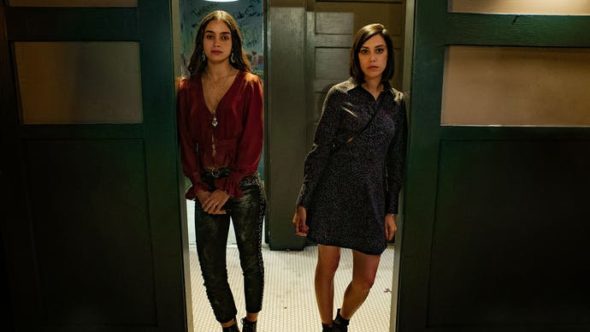 Is there a future for Vida? Recently, star Mishel Prada spoke with The Wrap about a possible spin-off for the Starz TV show.

Even though Vida aired its series finale a few days ago, Prada does have an idea for a spin-off to the Starz series:

You know, who I would love to see as a spin-off is Rocky and Eddy [played by Adelina Anthony and Anzoategui].

Their relationship to me is so amazing, and they’re very much of the neighborhood. They represent the neighborhood. So seeing something like that, where Eddy goes past it, would be really wonderful to get to explore.

And then seeing what happens to Mari. She, this season, kind of splinters off into something that isn’t just the neighborhood, but what’s happening on a much grander scale.”

What do you think? Are you a fan of Vida? Would you watch a spin-off of this Starz TV series?

I have no idea why Starz, would cancel Vida it was well written as well as acted. The show was creative and funny . I hope another network picks up Vida. Starz made huge mistake. Please note: I am not gay or Latino, which shouldn’t matter, point I am trying to make is show is appealing to all audiences. I love it! I hope it returns soon to another network. I applaud the writer and creator, great job!

Hell yes, Vida was such a good drama will miss it dearly. Was really hoping that it would be picked up by some other network. We need more programs like these for the hispanic population.

I love Vida and I am very sad and disappointed that it got cancelled, though I still have hopes that it will bycontinued by another platform like Amazon, Netflix, Hulu or HBO. However, if I can only get a spin-off I would gladly watch it. I would love to see how Emma and Nico’s relationship evolves, for me, their relationship is the most interesting one.

I was really into Vida, and am extremely disappointed in STARZ for cancelling Vida and Sweetbitter, another outstanding show. I have cancelled my subscription to STARZ. I would welcome any continuation of Vida! Just put it on another streaming service not STARZ.

I love vida I would absolutely watch a spinoff. I loved the way you ended it but, please don’t let this be the end.

I love vida I would absolutely watch a spinoff. I loved the way you ended it.

I love vida, I wood absolutely watch a spinoff. I loved the way you ended it.

Can someone please pick up this show?! VIDA CAN NOT END!! Especially at a time like this with everything going on in the world. Latin American community needs representation. Shows like VIDA and One Day At A Time give viewers real characters to relate to. Not to mention the show is so well made and film. Needs to be some kind of petition. LONG LIVE VIDA!!

I truly agree with you.

Omg i got so addicted on this show the best show since sons of anarchy i was so sad when sons of anarchy ended that’s how i feel about vida please don’t let it end yet STARZ this show is the ONLY reason i keep paying for your channel thank you a PROUD LATINA.

Vida was awesome it deserves another season. I would definitely watch a Mari spin off.

Vida has been such a great representation of Latinos I would love to see the show go on in a spinoff but with the same actors and same characters this was the first true all Latino drama series that I followed from day one every episode just kept getting better the story lines were so well written I was so captivated I truly hope that there is life for Vida after finale I’m Truly Proud to have experience such a great work of cultural art .