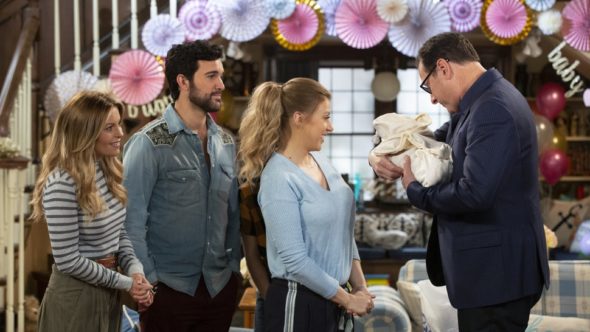 Is the fifth season of the Fuller House TV show a suitable finale for this Netflix show? As we all know, the Nielsen ratings typically play a big role in determining whether a TV show like Fuller House is cancelled or renewed for season six (we already know it’s ending). Netflix and other streaming platforms, however, collect their own data. If you’ve been watching this TV series, we’d love to know how you feel about the fifth season episodes of Fuller House here.

What do you think? Which season five episodes of the Fuller House TV series do you rate as wonderful, terrible, or somewhere between? Do you think that Fuller House on Netflix should have been renewed for a sixth season? Don’t forget to vote, and share your thoughts, below.

I am a Fuller House fanatic! I grew up watching Full House. So when I heard about the show Fuller House was in the works, I was SUPER EXCITED!! I’ve binged watch every season. Then I go back and rewatch them with family or friends who haven’t seen them yet. I can relate and connect in so many ways with DJ, Steph and Kimmy. I’ve cried my eyes out with them lol. I love how there is so much love in the Tanner/Fuller/Gibbler home. So hearing that it will be cancelled after this 5th season, hits home. Very disappointing. It’s… Read more »

Very disappointed this has been cancelled!!! I loved this show in the very beginning and loved the Fuller House as much. A show we could watch as a family.

I got so excited about fuller house when it first started and I just feel more comfortable watching it. I love every minute of it. But I just noticed Netflix had to cancel fuller house. I wasn’t really happy with that. I’m a huge fanatic the original full house because I grew up watching all my life. I’m starting to love fuller house now. I have been thinking about their fans and I feel for them for being upset about it too. I’m setting a good example for all their fans out in the world to be strong for them… Read more »

They should have gone to at least a season 6. There are still so many stories to tell. Where did Jackson go after high school? Ramona? Many stories for Max since he was promoted to higher grade. See Stephane’s baby more etc.
C’mon guys…it’s not over

We used to watch Full House and still rewatch it. We absolutely love love Fuller House as it addresses topics that interest our whole family and is a lot of fun-all of the characters bring something unique to this show which gives it a magic formula for highly desired family appropriate entertainment. It is too long to wait for the new episodes! Please make many more episodes for each season too!

One of the best TV series ever! We love it!

I’m a huge fanatic of fuller house and have so much fun watching it. I don’t feel good about the Cancelation.