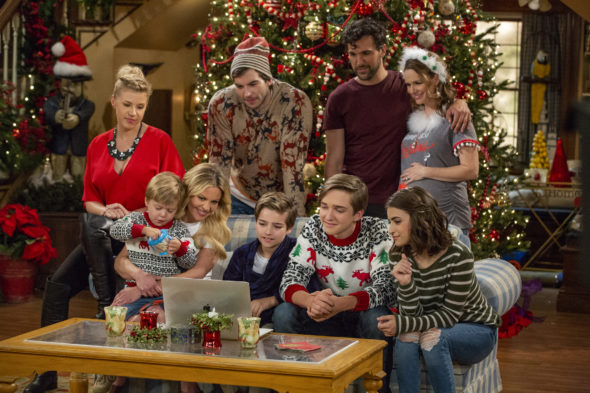 Looks like fans aren’t done with the Tanner-Fuller fam yet. Netflix has renewed the Fuller House TV show for a fifth and final season. The subscription streaming service broke the renewal news in a video announcement today, and they promise they have saved the best for last. Check it out, below.

A sequel to Full House, which ran for eight seasons and 192 episodes on ABC, this family sitcom centers on widowed mother and veterinarian, D.J. Tanner-Fuller (Cameron Bure) and her three sons; her sister Stephanie Tanner (Sweetin); friend Kimmy Gibbler (Barber) and her daughter. The final season of Fuller House should drop to Netflix in the fall of 2019.

What do you think? Are you a fan of the Fuller House TV series? Is it ending at the right time or not? If it were up to you, would Fuller House be cancelled or renewed for season six on Netflix?

Loved this show so much..I had to order netflex because I wanted to see how it ended.Now that they are all older would love to see them back,but not on pay TV.It’s not right to pay for a sitcom that was great and so realistic.I say bring em back.

Please don’t cancel this show! This is one of the few shows on Netflix that I really enjoy.

But not on pay to view..it’s so sad when you have to pay to watch something you really enjoyed!!!!!

Hope they rethink this decision I love it takes be back to my childhood and my girls remind me of how much I loved full house because they love this show as well!

Please don’t cancel! This one of my favorite shows! It’s a fantastic continuation of Full House.

Okay then. How about we cancel our Netflix after season 5 is out. I am sure Netflix will love that.

Wtf Netflix?! Why cancel something that people like? Is it because they’re too busy making movies with stupid endings?

They really should put it back on regular TV not as pay to view.

Dont cancel! I love this show. One of my favorite shows on NF right now. Im so sad.

Fuller house does not need to be cancelled. It’s one of the only normal shows around. The only reason why I purchased netflix was for this show.

You know it has a new creater well maybe new producer but still HENCE BRYAN BEHAR AND STEVEN BALDIKOSKI are the NEW SHOW RUNNERS!!!!

This is really stupid!!!!!!!!!!!!!!! The show should NOT be ending after JST 5 seasons it needs 8 seasons atleast!!!! Plz continue the show Kim and Fernando get married or remarried and Stephanie and jimmy get married and finally name their baby girl! And Matt and D.J. get married!!!!!!!!!!!!

Agree on everything except Matt and DJ getting married. I WAS Team Matt, but now after the whole blowup @ Steve and CJ’s wedding, I’m Team Steve all the way.

Definitely want to see more!!I will not order a show that I have to pay for..I loved this show so much,it kept my attention and was so family oriented.I agree with Sandy.

Fuller House does not need to be cancelled

I agree with Mandi..Thumbs up to you!