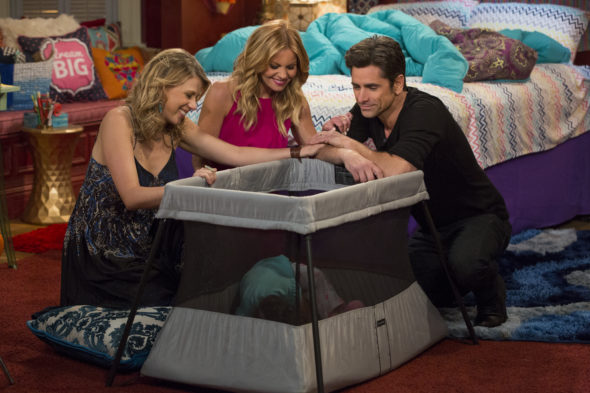 Is the Tanner-Fuller clan still muddling through in San Francisco? Has the Fuller House TV show been cancelled or renewed for a fourth season on Netflix? The television vulture is watching all the latest TV cancellation and renewal news, so this page is the place to track the status of Fuller House season four. Bookmark it, or subscribe for the latest updates. Remember, the television vulture is watching your shows. Are you?

Unless Netflix decides to publicize its viewership, it is hard to predict if they’ll cancel or renew Fuller House for season four, because Nielsen doesn’t tracking the ratings of streaming TV shows. Flying blind, I think it will get a renewal. Netflix picked up season three on Christmas Eve, last year. By early January, the streaming service upped its order from the customary 13 to 18 episodes, which shows they have some faith in it. In the meantime, I’ll keep a hungry out out for breaking developments. Subscribe for free updates on any Fuller House cancellation or renewal news.

What do you think? Should Netflix cancel or renew the Fuller House TV series for a fourth season? How long do you think this TV show will run?

I actually was a Full House fan all 9 seasons so when I heard Fuller House was coming out, I could not wait! I have watched every episode so far and hope it continues as long as Full House did. Yes, it does have some over the top moments or too ridiculous scenes in it but some times that’s what viewers need, especially nowadays. Please leave this show on, it’s a clean-cut, family-fun, child and adult can watch and enjoy together show. There are not many of the old sitcoms type shows left anymore. Leave this one alone.

I personally hope that it continues going, I find it really hard to find a good show with good drama. I got to the end of season three and I think it could be considered that it is now cancelled as it was not much of a cliffhanger, however there are ways to come back from it and make a couple more seasons.

Great show. It has to be renewed but Dj should stay with Matt…

Yes I agree, I am not a big fan of Steve. He may be her first love but in the words of Matt “he could be her last”

Please renew fuller house. Continue to renew it. Its funny and it keeps you going. I love fuller house its awesome. The way that season 3 ended makes us all want more.

I definitely want to see more Fuller House …Who will DJ end up with ? ( I’m seriously torn ) Will surrogate Kimmy end up having triplets ? Will Stephanie and Jimmy get married ? Will Stephanie and DJ have a double wedding ? Will Michelle FINALLY MAKE AN APPERANCE !!! (or at least someone resembling Michelle lol )

Renew please I love this show it’s clean and decent for all ages. There are not many Shows that don’t have foul language and this show for most part don’t . Season 1 was my lest favorite but season 2-3 are great!!!! We need season 4 PLESE NETFLIX