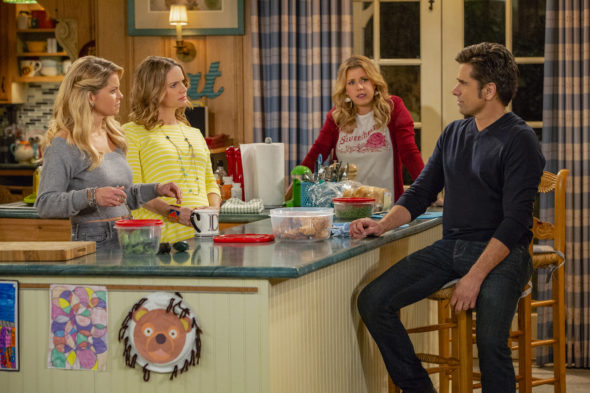 Is the Tanner-Fuller family still everywhere you look? Has the Fuller House TV show been cancelled or renewed for a fifth season on Netflix? The television vulture is watching all the latest TV cancellation and renewal news, so this page is the place to track the status of Fuller House season five. Bookmark it, or subscribe for the latest updates. Remember, the television vulture is watching your shows. Are you?

Will Netflix cancel or renew Fuller House for season five? So far, no decision has been made, but rumor has it the streaming service has been thinking of ending the comedy with its fourth season. Without ratings to analyze, it is difficult to predict, but right now, I suspect this may be the end of the road. Netflix brought in new showrunners for this installment, because creator Jeff Franklin was fired over allegations of impropriety. Sometimes, backstage situations like that affect the fate of a show. If, on the other hand, this series continues to perform well and the cast and crew are still game to continue, it could return. For now, I’ll keep an eye on the situation and update this page with any developments. Subscribe for free updates on any Fuller House cancellation or renewal news.

1/25/19 update: Fuller House has been renewed for a fifth season.

1/31/19 update: The Fuller House renewal is for a fifth and final season. Details here.

What do you think? Should Netflix have renewed the Fuller House TV series for a fifth season? Is it ending at the right time? If it were up to you, would Fuller House be cancelled or renewed for season six and beyond?

I just love watching FULLERHOUSE! WHY END IT after 6th season? We won’t be able to see Tommy or Stephanie’s baby girl to grow up. This show will be missed. We love everyone on the show. Please make up to 10th Seasons. EVERYONE WILL THANK YOU ALL! FROM
FULLHOUSE & FULLERHOUSE FAN CLUBS!

Would like to see many more SEASONS of FULLERHOUSE! THANK YOU!
LOVE YOU ALL FULLERHOUSE CAST. Can you please do more then 6th Season? How about SEASONS 7th, 8th, 9th, and More.