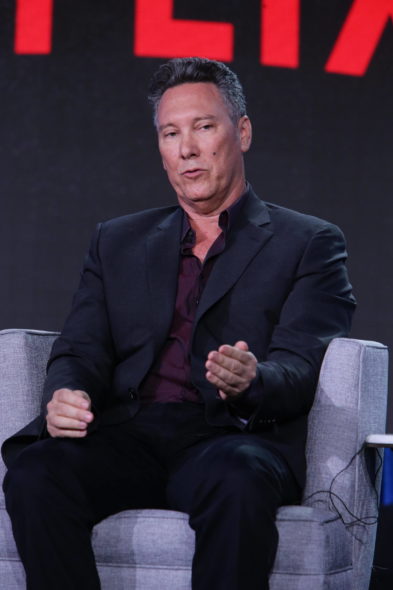 There’s a temporary vacancy in the Tanner homestead. Creator Jeff Franklin is out as the Fuller House TV show-runner for season four of the Netflix family sitcom. Warner Bros. Television, which produces the Full House sequel, has confirmed it will not renew Franklin’s overall production deal. The decision reportedly follows complaints about his behavior in the writers room and on-set.

NOTE: Fuller House is not cancelled. Netflix confirmed the season four renewal, back in January. Learn more from this Variety report.

According to multiple sources, the studio’s decision comes after it has received complaints about Franklin’s behavior in the writers’ room and on the set of the series, which is a sequel to the family-friendly “TGIF” sitcom “Full House” that was a staple of ABC’s schedule in the 1980s and ’90s.

“We are not renewing Jeff Franklin’s production deal and he will no longer be working on ‘Fuller House,’” Warner Bros. TV said in a statement. Stanton Larry Stein, a lawyer for Franklin, declined to comment for this story.

In a statement on Wednesday, a Netflix spokesperson said, “‘Fuller House’ will return for a fourth season, as planned. We hope to go into production in the next few months.”

Franklin has been accused of being verbally abusive to staffers and making inappropriate statements in the writers’ room, including making sexually charged comments about his personal relationships and sex life. Franklin has not been accused of directly sexually harassing or engaging in physical misconduct with any staffers.

According to a source, “Fuller House” staffers also complained about Franklin’s habit of bringing women he dated to the set and sometimes giving them bit parts in the series.

According to a source, Warner Bros. TV executives received an anonymous letter more than two years ago with detailed allegations about Franklin’s behavior with “Fuller House” writers and other staffers. Studio executives were warned that Franklin “was a walking lawsuit waiting to happen.” It’s not clear if Warner Bros. investigated the situation at that time. More recently, it’s understood that the studio did initiate a probe after receiving numerous complaints about Franklin’s behavior.

What do you think? Are you a fan of the Fuller House TV series? Will this decision to let Franklin go affect whether you watch the fourth season on Netflix? Let us know, below.

i loved full house and feel the same about fuller house. it is wholesome family show worth watching. if the people who help create the show are causing problems, then fire them. they will only bring the show down eventually. this guys sounds like scum and I wouldn’t want to go to work to have to put up with that stuff.

I really enjoy watching fuller I think it is so so funny and I love the characters and the costumes in it. I think that is just horrible to do that their is families enjoying and watching fuller and some one goes to court with it I think people watching it will think that knowing that this program went to court and the actors could be effect by it and the viewers

My whole family & I love Fuller House! I don’t understand why anyone cares about getting something cancelled in Netflix because it’s not as if it’s taking up air time where something you consider better could be playing. If you don’t like it, just don’t watch it, it interrupts your life in no way. I personally did not like Full House, the original, but I enjoy this re-vamp, & binge-watching it with my mom, sister, & the young lady I used to nanny, that has now become a permanent part of our family… now she LOVED the original Full House!… Read more »

Really stupid show, even worse than the first piece of garbage from years ago. Cancel this nasty drivel!

Yes, I love the guy Miller Boyette and Franklin who produced the show. I think it’s rude of them to ask Franklin to leave since he produced and created the show. I like it if the show continues playing with Jeff Franklin. And I love it if they play new Fuller House episodes on regular cable and regular tv.

Firstly, Miller Boyette did not ask Jeff Franklin to leave; Warner Domestic Television did. Second, it’s not ” regular tv and regular cable.” Broadcast television is the term. If you want something, pay the artists. Full House has the whole library on Hulu.