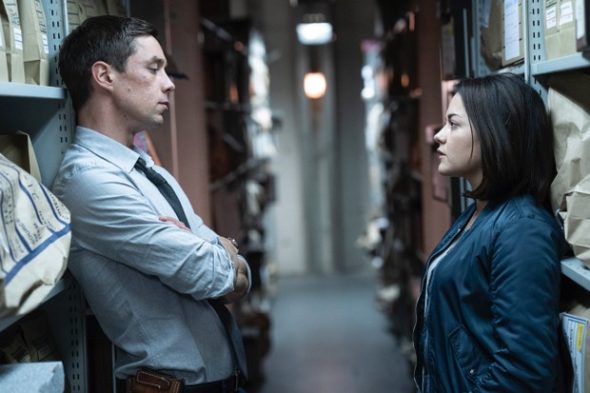 This series seems more like a mini-series” than an ongoing series so it may have a natural ending. Still, if the ratings are good enough, could Starz and BBC One still order a second season? Stay tuned.

A psychological thriller series, Dublin Murders is based on Tana French’s Dublin Murder Squad series of novels. It stars Killian Scott, Sarah Greene, Tom Vaughan-Lawlor, Moe Dunford, Sam Keeley, Antonio Aakeel, Conleth Hill, and Tom Vaughan-Lawlor. Set during the height of the Celtic Tiger financial boom of the millennium, the story focuses on two murder investigations which are led by Rob Reilly (Scott) and Cassie Maddox (Greene). As the case intensifies, Rob and Cassie’s relationship is tested to the breaking point and when Cassie is sent undercover for another murder case, she is forced to come face to face with her own brutal reckoning.

What do you think? Do you like the Dublin Murders TV series on Starz? Should it be cancelled or renewed for a second season?

I love this show and please renew season 2. It’s keep me guessing. On Starz Please

Please renew or do another another story line with Rob & Cassie. I would love to see another detective series staring Sarah Greene and Killian Scott.

Please let me know if you bring the series back. It’s driving me crazy not knowing what happened to the kids in the woods. And what about the baby? Lots of things unanswered. The stories of the two detectives should be told more of what happens to them next. Who is the father of the baby, and what happens, these should be told to the viewers. It’s just mean not to explain these things. We need more of the show, please!

Pls bring on another season of Dublin Murders. Loved it on Starz here in CA, USA