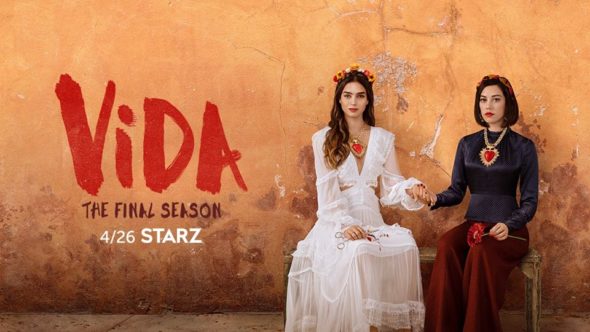 We don’t have to wonder if Vida will be cancelled this time around. Starz has already announced that season three is the end. While there won’t be a fourth season, viewers will get six episodes to wrap up the sisters’ story. Will the ratings rise in the final year? Stay tuned.

Based on the short story, Pour Vida, by Richard Villegas Jr., Vida stars Melissa Barrera, Mishel Prada, Ser Anzoategui, Carlos Miranda, Chelsea Rendon, Maria-Elena Laas, and Roberta Colindrez. The series centers on two estranged Mexican-American sisters from the Eastside of Los Angeles. When tragedy brings them back together, Lyn (Barrera) and Emma (Prada) have to face the truth about their past, their mom, and themselves. In the third season, the bar is booming and their love lives are actually flourishing but then, the Hernandez sisters discover a long-buried family secret that ruins their hard-won peace. The sisters must decide if they can continue together as a family or if they should move on alone, for good.

What do you think? Do you like the Vida TV series on Starz? Should it have been renewed for a fourth season?