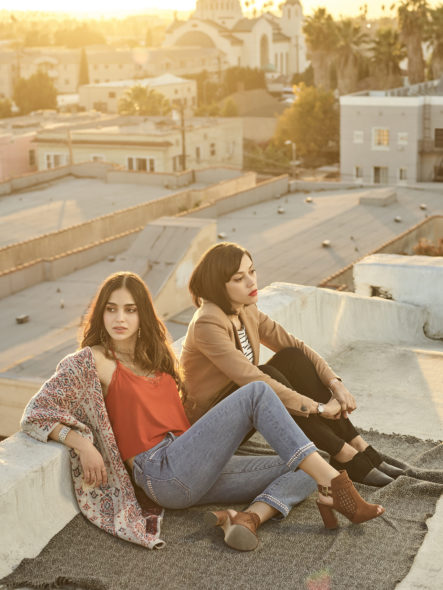 How is Emma and Lyn’s reconciliation during the first season of the Vida TV show on Starz? As we all know, the Nielsen ratings typically play a big role in determining whether a TV show like Vida is cancelled or renewed for season two. Unfortunately, most of us do not live in Nielsen households. Because many viewers feel frustration when their viewing habits and opinions aren’t considered, we’d like to offer you the chance to rate all of the Vida season one episodes here.

A Starz drama based on the short story, Pour Vida, by Richard Villegas, Jr., Vida stars Mishel Prada, Melissa Barrera, Ser Anzoategui, Carlos Miranda, Chelsea Rendon, and Maria-Elena Laas. The TV series centers on two estranged Mexican-American sisters who are reunited by tragedy. Despite growing up together on the Eastside of Los Angeles, Emma (Prada) and Lyn (Barrera) could not be any more different from each other. Now a successful businesswoman, Emma returns home from Chicago, while good-time girl Lyn arrives from San Francisco. Soon, they’ll have to face things about their pasts, their mother, and even themselves.

What do you think? Which season one episodes of the Vida TV series do you rate as wonderful, terrible, or somewhere between? Should Starz cancel or renew Vida for a second season? Don’t forget to vote, and share your thoughts, below.

I think show is great and hope it is renewed for a second season .
The show is a look into a community that is underserved and the story is unique and deserving of continuing to a good outcome for all of the characters.

I admit I was a bit shocked at the beginning of the show, but I absolutely became a fan very quickly. I hope it renews for a second season. The first was way too short. Good work from the cast.

I agree ! I am not part of the gay community however, I enjoy watching this show ! I am Latino of Mexican descent, and I am glad/ happy to see a show with Chicano/a community ! I think Starz made a great decision (renewing show) and I’m sure the viewership will grow !