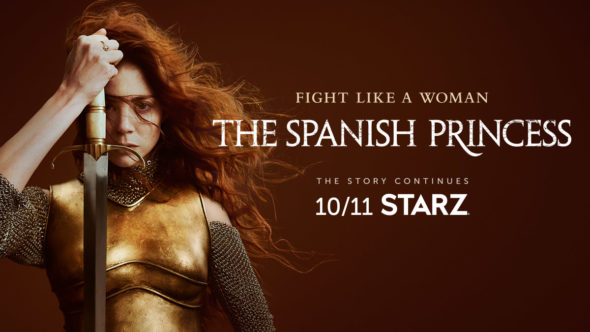 We don’t have to wonder if The Spanish Princess will be cancelled or renewed for a third season. Starz has already announced that season two will conclude the series. If the ratings are good enough and there’s enough interest, will Starz continue to make TV shows like this? Stay tuned.

A historical drama series, The Spanish Princess TV show stars Charlotte Hope, Ruairi O’Connor, Stephanie Levi-John, Georgie Henley, Laura Carmichael, Ray Stevenson, Sai Bennett, Andrew Buchan, and Peter Egan. The second season continues the story of Queen Catherine (Hope) and Henry VIII (O’Connor). Presiding over the most glamorous court in Europe and beloved by their people, together they create an England that is proud, confident, and strong enough to withstand threats from abroad. Catherine’s struggle to produce an heir places her marriage and position in the court at risk, and she is haunted by her choices from the past. Despite proving herself a politician, a diplomat, a national inspiration, and even a military commander, Catherine must battle to save her love with the King and to preserve the peace and prosperity of their reign.

For comparisons: Season one of The Spanish Princess on Starz averaged a 0.06 rating in the 18-49 demographic and 478,000 viewers.

What do you think? Do you like The Spanish Princess TV series on Starz? Would you have watched a third season if there had been one?