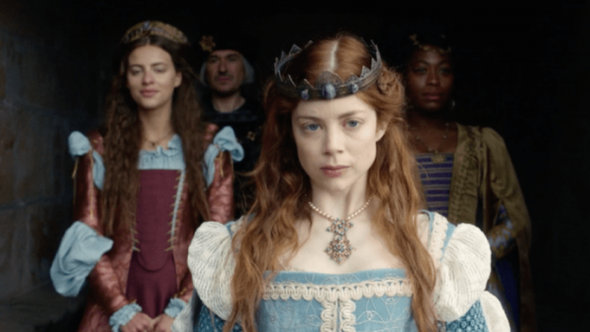 What has become of Catherine of Aragon? Is The Spanish Princess TV show cancelled or renewed for a second season on Starz? The television vulture is watching all the latest cancellation and renewal news, so this page is the place to track the status of The Spanish Princess, season two. Bookmark it, or subscribe for the latest updates. Remember, the television vulture is watching your shows. Are you?

Based on The Constant Princess and The King’s Curse by Philippa Gregory, the series centers on Catherine of Aragon (Hope), the first wife of England’s King Henry VIII (O’Connor). Betrothed since childhood to England’s Prince Arthur (Imrie), Catherine has been raised to be the Queen of England. When Arthur dies shortly into their marriage, she must pull out all the stops to keep destiny within her grasp. Along with the help of her diverse court, she sets out to marry the new heir to the throne, Prince Harry.

Will Starz cancel or renew The Spanish Princess for season two? If Starz remains true to its pattern with The White Queen and The White Princess, this will wind up as a one season mini-series, and any follow-ups will be released under a new title, with casting changes to carry-over characters. Sky-high (or abysmally low) viewership could change everything though, so I’ll keep an eye on the Nielsens and update this page as the season progresses. Subscribe for free alerts on The Spanish Princess cancellation or renewal news.

6/3/19 update: Starz has ordered a “second run” of episodes to wrap up The Spanish Princess series.

What do you think? Are you glad that The Spanish Princess TV series has been renewed for a second season? How would you feel if Starz had cancelled this TV show, instead?

I enjoyed The Spanish Princess so very much. Would love to see several more season. Excellent acting by cast. Thank You Pat Haddock

I have been waiting for the Second season of the Spanish Princess and am so happy it was renewed. I am just waiting for the date it’s going to be released on Starz! I would have been so disappointed had it not have been renewed.
Please let us know what date the first episode will air.