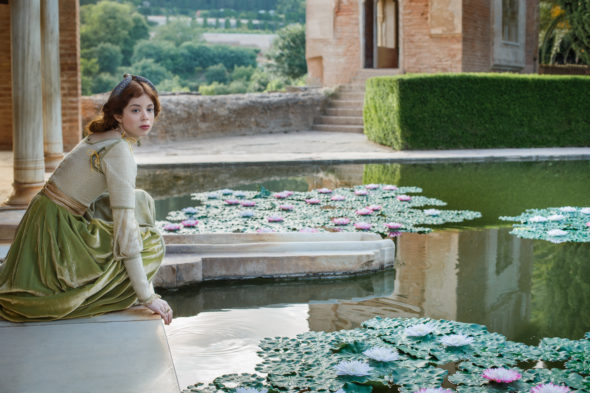 The Spanish Princess will continue to reign. Deadline reports Starz has ordered a “second run” for the TV show to wrap up the series.

Starz has ordered eight additional episodes for The Spanish Princess, which premiered in early May. The first season of eight episodes will run through June 23rd.

We are thrilled to tell the next chapter of Catherine of Aragon’s story as she negotiates war, politics and marriage to the most dangerous King of England. As a company that always produces compelling and dynamic projects, Starz has been a great creative partner and we look forward to concluding Catherine’s journey with them.”

Starz COO Jeffrey Hirsch added, “Emma and Matthew have created an alluring portrait of one of the most familiar narratives in English history. Viewers are intrigued by Catherine of Aragon’s story and this eight-episode conclusion will give us the opportunity to tell it in its entirety.”

What do you think? Are you watching The Spanish Princess? Are you glad it’s coming back for a second round?

I would like a 3rd season of the Spanish Princess! Loved it!

Great show and cast. Last episode was called “Field of Cloth of Gold” was that the last episode?

Superb account of the rise of the Tudors. Albeit historically inaccurate, it gives a nice overview and the show really depicts the harsh reality of life in those times. Keep it going please…

I am glad to hear that there were more episodes ordered! I have been looking for them and thought that was finished. I look forward to it! Love it!!