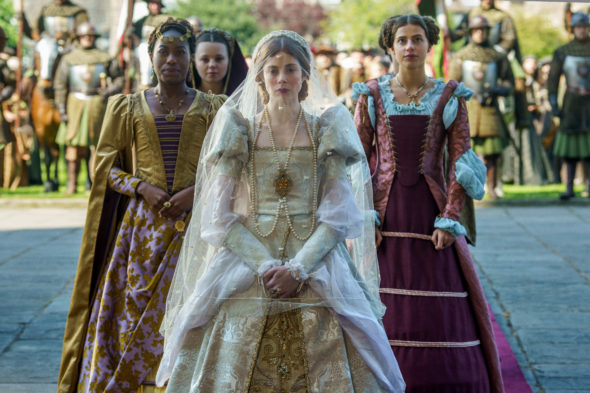 TV show description:
From Emma Frost and Matthew Graham, The Spanish Princess TV show is a historical drama that unfolds in the 16th century. The series is based on the novels The Constant Princess and The King’s Curse by Philippa Gregory and centers on Catherine of Aragon (Hope), the first wife of England’s King Henry VIII (O’Connor). It is a sequel of sorts to The White Princess, itself a follow-up to The White Queen.

With an iron will that belies her tender age, Catherine Princess of Spain has been betrothed to Arthur (Imrie) Prince of Wales, since they were but small children. At age 17, Catherine departs sunny Spain for sodden England, along with her court, including her ladies-in-waiting, Lina (Levi-John) and Rosa (Parkes).

When Catherine first arrives in England, she maintains her resolve in the face of the treacherous Tudor matriarchs, grandmother Margaret Beaufort (Walter), and mother Elizabeth of York (Moen). Catherine even manages to instill a measure of confidence in shy Arthur.

All too soon after their marriage though, Arthur dies, leaving Catherine in a precarious position. Having been taught since childhood that she was destined to be Queen of England, Catherine is not ready to bury that dream along with her husband, so she sets out to marry the new heir to the throne, Prince Harry.

Catherine is the daughter of King Ferdinand II of Aragon. Her mother, Queen Isabella of Castile (Borrachero) is a strong leader of great renown and an overbearing parent. Catherine adores her and does not realize that it was Isabella who demanded the execution of the York claimants to the British throne, as a stipulation of the original betrothal contract.

Arthur and Harry’s father, King Henry VII (Cowan) has long desired to shore up his kingdom by allying with Spain. He is inclined to lean on his wife, Elizabeth (aka Lizzie) for guidance and as a balance to his headstrong mother, Margaret. He’s quite taken with Catherine, which has not escaped his wife’s notice.

In advance of Arthur and Catherine’s betrothal, Lizzie went to great lengths to cement the agreement between England and Spain. She even ordered the execution of her brother Richard and cousin Teddy, to that end. Although she is riddled with guilt, she is a steady ally and advisor to her husband and does not trust Catherine, probably because she recognizes herself in the young woman.

Simmering with a quiet resentment, Teddy’s sister, Maggie Pole (Carmichael), keeps her contempt for the Tudors to herself. She has always loved Prince Arthur and tries to keep herself occupied with her husband and children, but as the Tudors grow more politically vulnerable, Maggie decides to work toward her own goals.

Meanwhile, the tomboyish Meg Tudor (Henley), sister to Arthur and Harry, has her own problems. When this lively lass learns she is to marry King James IV of Scotland, she grows afraid of the future and strains against others deciding her fate.

Helping Catherine along the way is her lady-in-waiting, Lina, who is from African-Iberian nobility. Lina’s family sacrificed their Muslim faith in order to advance in Spanish society. Like Catherine, Lina understands the weight of familial responsibility and the women’s bond.

Lina’s loyalty is tested by the charismatic Oviedo (Cobham), a crossbowman in service to Catherine’s mother. Because he is beneath Lina’s station, their courtship is far from uncomplicated. As a devout Muslim, he is concerned that Isabella and Ferdinand’s reign will put in peril his people back in Spain.

Unlike Lina, who keeps her own counsel, Catherine’s other lady-in-waiting, Rosa, is an open book. Sometimes she allows a handsome face to distract her from her duties, but she is still a loyal friend to both Catherine and Lina.

Told from the women’s point of view, The Spanish Princess highlights the lives of people of color in 16th century London, while it follows a youthful Catherine of Aragon on her path through palace intrigue toward her place in history.

Series Finale:
Episode #16 — Peace
As Henry descends into madness, the stakes have never been higher for Catherine; her husband has become a threat to her life.
First aired: November 29, 2020.

What do you think? Do you like The Spanish Princess TV series? Should this Starz TV show have been renewed for a third season?

I loved ALL the series of this line. I want MORE Spanish Princess and more of this type of series.

I’m also in Droughtlander and can’t wait for the next season of Outlander to start.

Good to hear that fans get another eight episodes. This series was not as good as The White Queen or The White Princess, but all in all very watchable and interesting if you like this period drama from the 16th century.

The White Spanish Princess was
the greatest series on Starz
as far as I was concern.

No More White Princess No more
Starz for me.

I thought it was very interesting, enjoyed it

Love this series from the White Queen to the White Princess To the Spanish Princess. Please don’t cancel. What About a SERIES about MARY QUEEN OF SCOTS (aka) BLOODY MARY. Prince Harry only ruled a short time and then MARY QUEEN OF SCOTS took the throne. Wow exciting We watch record refer back and watch again to make sure we missed nothing. THANKS FORA GREAT SUNDAY NIGHT

Bloody Mary was NOT the Queen of Scots. You have misinformation. Bloody Mary was Mary I of England. The daughter of King Henry VIII. Queen Elizabeth took over after her sister died. She was known as Bloody Mary for the HUNDREDS of Protestants she killed. Just saying. My bloodline.