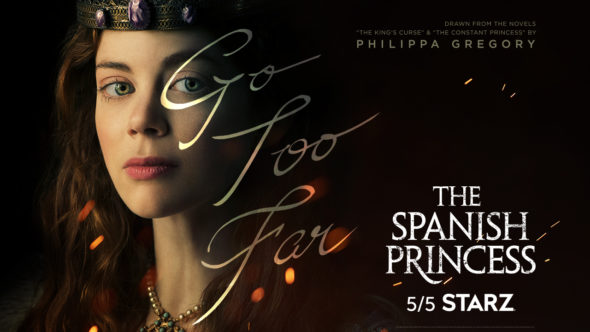 Starz has had some ratings success adapting the novels of Philippa Gregory as limited TV series. The premium cable’s newest such offering is The Spanish Princess TV show, based on The Constant Princess and The King’s Curse. Does this sort-of-sequel to The White Princess (itself a follow-up to The White Queen) have what it takes to woo back its viewers? Although it seems intended as a mini-series, will it prove such crown jewel that it returns for another round? Will The Spanish Princess be cancelled or renewed for season two? Stay tuned. *Status update below.

A Starz historical drama from Emma Frost and Matthew Graham, The Spanish Princess stars Charlotte Hope, Stephanie Levi-John, Angus Imrie, Harriet Walter, Laura Carmichael, Ruairi O’Connor, Georgie Henley, Elliot Cowan, Alexandra Moen, Philip Cumbus, Nadia Parkes, Aaron Cobham, Alan McKenna, Richard Pepper, Olly Rix, Jordan Renzo, Daniel Cerqueira, and Alicia Borrachero. The series centers on Catherine of Aragon (Hope), the first wife of England’s King Henry VIII (O’Connor). Betrothed since childhood to England’s Prince Arthur (Imrie), Catherine has been raised to be the Queen of England. When Arthur dies shortly into their marriage, she must pull out all the stops to keep destiny within her grasp. Along with the help of her diverse court, she sets out to marry the new heir to the throne, Prince Harry.

What do you think? Do you like The Spanish Princessr TV show? Should this Starz TV series be cancelled or renewed for a second season?

*6/3/19 update: Starz has ordered a “second run” of episodes to wrap up The Spanish Princess series.

it’s amazing how Starz manages to turn the history of roles and records into something so incredible. I hope they renew for season 2. Love it.
From Brazil.