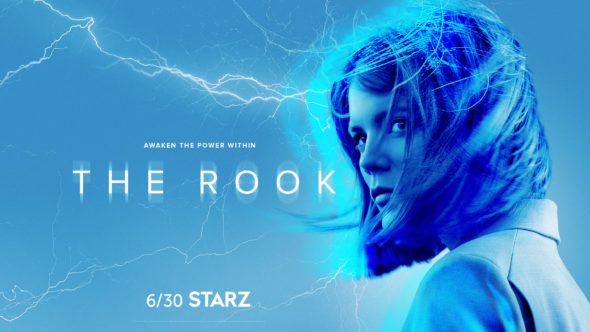 As a premium cable network, Starz doesn’t have to please ad buyers. Instead, it has to please paid subscribers. So while the Nielsen ratings don’t play into cancellation and renewal decisions in the same way, they do give us a rough idea of which TV series attract and retain viewers. This summer, The Rook TV show makes its debut on Starz. Will the first season provide the kind of programming viewers want? Will The Rook be cancelled or renewed for season two? Stay tuned. *Status update below

What do you think? Do you like The Rook TV show? Should this Starz TV series be cancelled or renewed for a second season?

I like this show, I only have two problems with the show first its Myfanwys memories very few of her memories come back to her by episode 4; so your slightly confused because the character is so confused. It would have been nice if they gave some of the memories to Myfanwy thoughout the show instead of all at once. You as a watcher would have been less confused and things would have made more sense. My second problem is Myfanwys relationship with Gelstalt; while some may say this relationship technically does not exist; it is hard not to pair… Read more »

I guess I’m a little late since this show was already canceled. I was great while it lasted. I just thought there would be more.

I really enjoyed the series. I haven’t read the original book so I am not jaded. I often find myself disappointed when I have read a book first so I typically do not watch a movie if I read the book.
I enjoyed this series and although the story moves slow at first, I almost feel it needs to so it can reel you in to the story. I will be disappointed not to see how these complicated relationships play out in the end. I personally am rooting for Gestalt and Myfanwy coming to the rescue of other EVAs.

Please give us season 2

I think the rook is a refreshing sci fi about enhanced people and its not the X-Men but seem more realistically possible. Can’t wait for the second season.

I am enjoying Season one and hoping for a season two!

just watch the whole season totally hooked even stayed up all night to finish, needs a another season at least and alot more more publicity, come on get it back on our screens

Oh totally hooked! I actually watched it live every week. Looked forward to seeing what was going to unfold. A secret gem, that didn’t get enough publicity. I hope there is a second season.
Since the tv show is taking a different tack than the book, I look forward to where the story lines could go with all the characters. They could brave a second season path with all of the diverse storylines. Like the way they used the gestalt, could be used more effectively in expanding storylines.

Just Started Watching It And Almost On The End. I like it. Please Renew!!