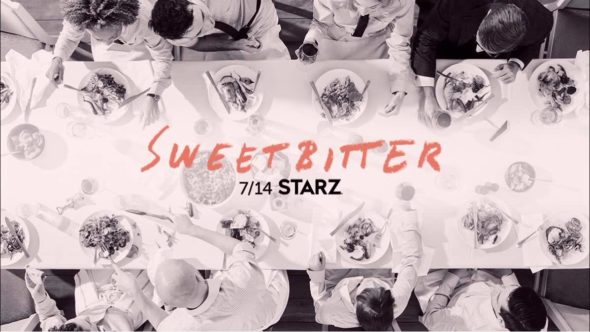 In last year’s Nielsen ratings, the freshman outing of the Sweetbitter TV show earned what would be low numbers on a broadcast network, but they were good enough to make it a middle-of-the-pack performer for Starz. Now that it is back for a second season, can it attract a larger audience and gain some staying power, or is it all downhill from here? Will Sweetbitter be cancelled or renewed for season three? Stay tuned. *Status update below.

Created by Stephanie Danler, the Sweetbitter TV show is based on her book of the same name. The Starz cast includes: Ella Purnell, Tom Sturridge, Caitlin FitzGerald, Paul Sparks, Evan Jonigkeit, Eden Epstein, Jasmine Mathews, and Daniyar. The drama centers on Tess (Purnell), who moves to New York City in search of a new life and winds up training at one of the city’s top restaurants at the age of 22. In the second season, as Tess comes into her own, she realizes she has to learn how to play the game, in order to survive.

For comparisons:: The first season of Sweetbitter averaged a 0.06 rating in the 18-49 year old demographic and an average total audience of 164,000 viewers.

What do you think? Do you like the Sweetbitter TV show? Should this Starz TV series be cancelled or renewed for a third season?

Please please renew this show! So compelling! Love it!!

Loved this show please bring it back !
Some great characters loved the chemistry evolving , so unfortunate when a good show doesn’t get the audience it deserves.
Hope some how it will find a way back .
Tess has more to say !

Hoping Starz renews Sweetbitter. It’s interesting and new. I can’t wait to see where it goes next.

I like this show and hope it catches on for a third season. Nice distraction and I was a bus boy/server many years ago in a very large restaurant. Lots of fun

I hope there’ll be a season 3!

Love the series, keep them coming and renew!

Love this show! Need to finish the story! ❤️

Please bring it back! Finish out the story!!! Love this show! ❤️❤️❤️

We love Sweetbitter, please come back with a season 3!

Please…a 3rd season would be wonderful! I love everything about sweetbitters! Excellent show!!!