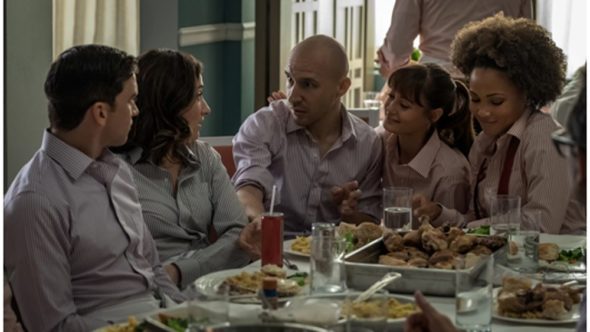 Television can be a bittersweet business, full of cancellations and renewals. This time around, Sweetbitter has ended up getting the short end of the stick. Starz has cancelled the low-rated dramedy series after two seasons.

Sweetbitter stars Ella Purnell, Tom Sturridge, Caitlin FitzGerald, Paul Sparks, Evan Jonigkeit, Eden Epstein, Jasmine Mathews, and Daniyar. Based on the novel from series creator Stephanie Danler, the drama centers on Tess (Purnell), a 22-year-old woman who moves to New York City in search of a new life and winds up training at one of the city’s top restaurants. In the second season, as Tess comes into her own, she realizes she has to learn how to play the game, in order to survive.

While the ratings were quite low, the cancellation is still a bit of a surprise since it was produced by Starz’s corporate parent, Lionsgate. The 14th and final episode of Sweetbitter aired on August 18th.

What do you think? Did you watch the Sweetbitter TV show? Are you sorry that there won’t be a third season?

I loved this show, the characters were well developed and the acting was great. Starz should’ve advertised it better. During this pandemic, Starz should’ve given it a second life by promoting it due to us not being able to go and eat at a restaurant. People would have tuned in. They missed a big opportunity there.

Loveeeeeee this show so sad to see it canceled. Every time I finally find a show I like it gets canceled. So modern and well made

Please please add another season of Sweetbitter. Wh at a great show.

I just watched season 1 and 2 of sweet bitter and was hooked I’m devastated that starzplay has cancelled yet another fantastic show why? What’s the point showing 2 seasons and then cancelling they need to start advertising what’s coming on so more people can watch it I’m ending my subscription as I really dont see the point in getting 2 seasons of something that was fantastic to not get further seasons starzplay need to get this sorted

Sweetbitter is an outstanding show which I really liked. I’ve cancelled my STARZ subscription as they also cancelled Vida, another great show. So much for high quality shows! Shame on you STARZ!!