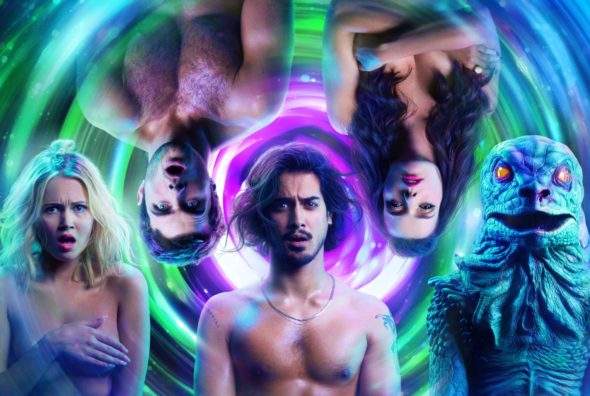 Today, Starz announced that The Girlfriend Experience had been renewed. Unfortunately, the same can’t be said for the channel’s Now Apocalypse series. The low-rated show has been cancelled and won’t be returning for a second season.

A surreal comedy, Now Apocalypse stars Avan Jogia, Kelli Berglund, Beau Mirchoff, and Roxanne Mesquida. The story centers on Ulysses (Jogia) and friends Carly (Berglund), Ford (Mirchoff), and Severine (Mesquida). In one way or another, each of them is in pursuit of fame, love, and sex, as they try to make their way in Los Angeles. Amidst all of their romantic pursuits, Uly starts to have dreams which strike him as premonitions that something dark and dangerous is really going on — or maybe he’s just smoking too much pot.

The first season of Now Apocalypse averaged a 0.02 rating in the 18-49 demographic and 89,000 viewers. It’s the lowest-rated of Starz scripted TV shows.

The news of the cancellation came at the Television Critics Association summer press tour, from Starz COO Jeffrey Hirsch. He said, “Now Apocalypse is a great show, as we all know it’s been a really good experiment, but we have made the decision not to bring it back.”

The first season of 10 episodes wrapped on May 12th.

What do you think? Did you watch the Now Apocalypse TV show on Starz? Would you have watched a second season of this comedy series?

I’m really disappointed to find out that this show will not return for a season 2!
I really liked it and enjoyed it’s crazy characters and story lines, it was original and different and it’s sad to it cancelled! I never understand who makes these dumb decisions to cancel to good shows and keep the crappy shows! This was the only show I watch on STARZ so I guess that’s one more cable channel I no longer need to pay for!! 🙁

Great show I loved the concept and originality. The cheese factor was part of the whole show but each character had true lives and concerns about people in their 20’s. So sad it’s gone. It’s the reason I subscribed to STARZ

I loved this show. It was mysterious, funny a little gay and now ill never know what happens. Is there a book?you people always cancel the good shows and leave the ignorant boring ones on forever.

This show had plenty of potential. Sad that Starz cancelled it. I don’t understand why the ratings were so low. It was something different and fresh.

I just got turned on to this show and I’ve been watching in serial. This is such a good show. It’s disappointing that it wont be renewed for a second season. So much potential.

I loved the show. Very fresh. Great cast. Steamy. They gave up way too early.

losing faith in starz to

Same here! They did so with ‘Evil Dead’ and they are doing it AGAIN with ‘Now Apocalypse’. They can not see a great work of art when they have one. ‘Now Apocalypse had a fascinating and totally fucked up storyline and took great use of (subtle) metaphores; the cast, the music and the style are (overall) unique and very typical of Gregg Araki’s work/universe. I had also loved his ‘signatures’ on some episodes of the amazing ‘Heathers’ TV series (another great show that has been killed unfairly too soon). Most of these artists are never recognized properly… Bryan Fuller is… Read more »

Horrendous horrible show and the ratings prove it. Producers and TV guys need to realize when you insult 50% of the country your show is going to have lousy ratings. Here’s an idea how about keeping politics out of the show. That way you don’t chase away millions of potential viewers.

No. Considering they allowed most of the episodes to air on their app before they aired on television, this statement would 1500% incorrect.

This series is as Gregg Araki as it could get… He’s making art, not necessarily making a political statement.