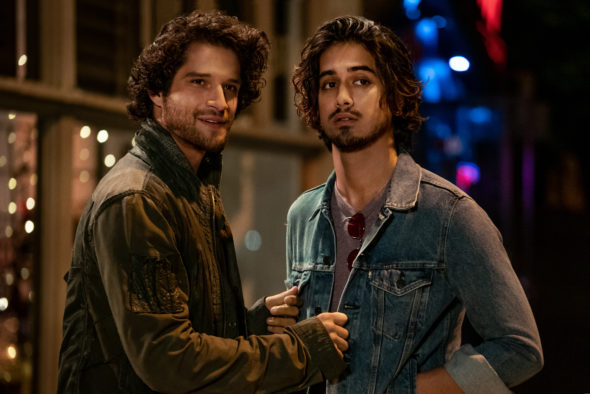 Is it the end for Now Apocalypse? Starz is releasing the full season of the freshman TV show beginning today, March 22nd.

From Gregg Araki, the surreal comedy centers on a group of friends trying to make it in Los Angeles. The cast includes Avan Jogia, Kelli Berglund, Beau Mirchoff, and Roxanne Mesquida.

It’s unclear why Starz is releasing all 10 episodes of Now Apocalypse, but it could be a sign that the series is headed for cancellation. The two episodes that have aired so far have earned a .03 rating in the 18-49 demo and 136,000 viewers, making it the network’s lowest-rated TV show for the 2018-2019 season.

Santa Monica, Calif., March 22, 2019 – For all the fans craving a binge, Starz, a Lionsgate company (NYSE: LGF.A, LGF.B), is releasing the full 10-episode premiere season of the exhilarating and critically acclaimed new Starz Original Series “Now Apocalypse.” An Official Selection of Sundance Film Festival 2019 and CANNESERIES Festival 2019, “Now Apocalypse” has been made available to binge watch across all STARZ non-linear platforms, including the STARZ app, STARZ On-Demand and STARZPLAY in the U.S., U.K. and Canada on Friday, March 22, 2019 starting at 12 AM ET. Starz also made the series premiere episode available to watch for free in its entirety online on Starz.com, STARZ YouTube channel, Reddit and Pride Media platforms (Pride.com, OUT.com and Advocate.com).

“Gregg Araki has created a vibrant world filled with relatable characters and relationship storylines and we have found that many fans want to consume this content as soon as possible,” said Carmi Zlotnik, President of Programming for Starz. “We are giving this audience every opportunity to dive into the crazy world of ‘Now Apocalypse’ and ride the roller coaster of the season at their own pace.”

“Now Apocalypse” stars Avan Jogia (“Tut,” “Twisted”) as Ulysses, who is struggling to figure out his life in the surreal and bewildering city of Los Angeles. Kelli Berglund (“Lab Rats,” “Fosse/Verdon”) stars as Carly, Beau Mirchoff (“Awkward,” “The Fosters”) as Ford, and Roxane Mesquida (Kaboom, “Gossip Girl”) as Severine, all of whom are on quests pursuing love, sex and fame. Between sexual and romantic dating-app adventures, Ulysses grows increasingly troubled as foreboding, premonitory dreams make him wonder if some kind of dark and monstrous conspiracy is going on – or if he is just smoking too much weed.

“Now Apocalypse” will continue to air weekly at 9 PM ET/PT on STARZ airing every Sunday night through May 12, 2019.”

What do you think? Have you seen Now Apocalypse? Do you want a second season?

As a 50 something male I found the show a little silly at first and didn’t plan on watching it through to the end. After I heard all the season episodes were released I did watch it through to the end. I think it was a smart decision to release the episodes early. The show definitely grows on you and I would be happy to see a second season.

Season 2 definitely needs to happen. I was wondering why I was able to watch every episode. Not mad that I did but if I have to wait to get through the season I would’ve done that too. Love Now Apocalypse!!

THIS SHOW NEEDS A SEASON 2!!! It is amazing!!! I think the cinematography is excellent and the acting is phoneomal. I found myself loving all of the characters for various reasons and honestly was estactic when I didn’t have to wait week by week for each episode. I would hope that they don’t trash such a great show with great potential, because it would at this point wreck me.

This is such a great show. I subscribed to Starz for American Gods, but thos show is just as good if not better. They need to give it another chance

I sure would love a 2nd season. This is a genre that is hard to define. Sorts like Sense8. It takes a bit of time to catch an audience.

I have been watching this show from the beginning and subscribed to Starz just for it. 2 episodes was not nearly enough to justify cancellatin.

Wasn’t sure what I would see but this show is so different I wish it was longer than 30 minutes. Love the actors & the stories. Please renew!!!!

Yes… please give us a second season!

Really enjoyed the series! Very funny, smart and sexy. Please give us a second season!

It is awful. If you’re going to cancel a quality show like Counterpart, you absolutely cancel a piece of garbage like this.

Definitely needs a 2nd season, it’s wacky and off the wall strange.

I like the series. Find it to ne unpredictable, funny, a little dirty and smart.