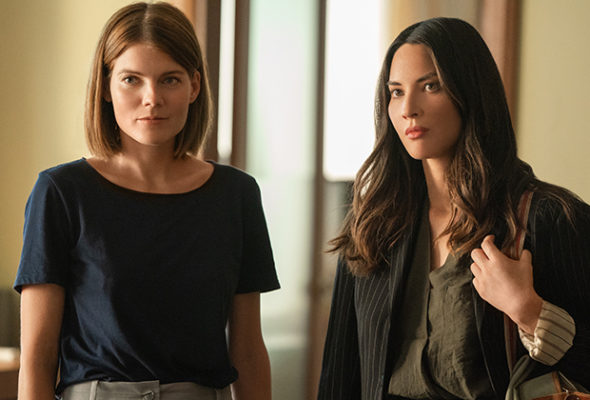 “My memory’s a massive black hole.” Starz just released a new trailer and key art for their upcoming TV show, The Rook.

The supernatural thriller “tells the story of Myfanwy Thomas, a woman who wakes up in the rain beside London’s Millennium Bridge with no memory of who she is and no way to explain the circle of latex-gloved dead bodies splayed around her.” The cast includes Emma Greenwell, Olivia Munn, Joley Richardson, and Adrian Lester. 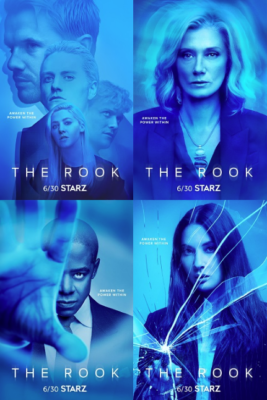 Santa Monica, Calif. – June 4th, 2019 – Starz, a Lionsgate company (NYSE: LGF.A, LGF.B), today released the official trailer for the Lionsgate and Liberty Global-produced STARZ Original Series “The Rook.” In addition to the previously released key art, featuring Emma Greenwell in the title role of ‘Myfanwy Thomas,’ STARZ also today shared the character art for the balance of the star-studded cast. The full collection of art combined with the official trailer provide a nod to each characters’ abilities and give deeper insight into the highly-anticipated new season, which will premiere on Sunday, June 30th at 8PM ET/PT.

The striking character art grants a first-look at Joely Richardson (“Nip/Tuck,” Red Sparrow) as ‘Linda Farrier’, Olivia Munn (“The Newsroom,” The Predator) as ‘Monica Reed’, Adrian Lester (The Day After Tomorrow, “Riviera”) as ‘Conrad Grantchester’, and Ronan Raftery (Fantastic Beasts and Where to Find Them, “Moone Boy”), Catherine Steadman (About Time, “Downton Abbey”) and Jon Fletcher (“Genius,” “The Messengers”) as ‘The Gestalt’.

About The Rook
“The Rook” is a supernatural spy thriller, which tells the story of Myfanwy Thomas, a woman who wakes up in the rain beside London’s Millennium Bridge with no memory of who she is and no way to explain the circle of latex-gloved dead bodies splayed around her. When Myfanwy discovers she is a high-ranking official in the Checquy, Britain’s last truly secret service for people with paranormal abilities, she will have to navigate the dangerous and complex world of the agency to uncover who wiped her memory – and why she is a target.

Liberty Global will simultaneously exclusively premiere the series on demand through certain of its European cable TV platforms, while Liberty Latin America will do the same in its markets in Latin America and the Caribbean. Lionsgate holds worldwide rights to “The Rook” and is actively licensing the series to international buyers.

What do you think? Are you a fan of thrillers? Will you check out The Rook?