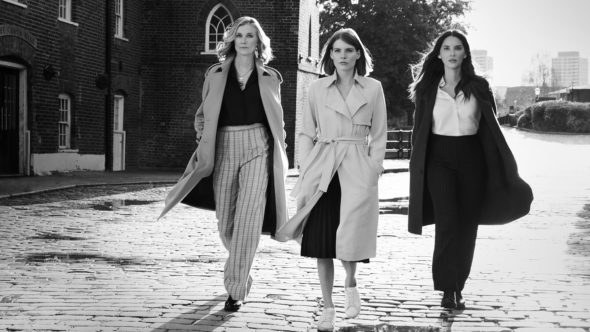 TV show description:
Based on the 2012 novel of the same name by Daniel O’Malley, The Rook TV show comes from executive producers and showrunners Lisa Zwerling and Karyn Usher. The fantasy spy thriller follows Myfanwy Thomas (Greenwell), who awakens in the rain at London’s Millennium Bridge, but has no memory and cannot explain the circle of corpses surrounding her.

Myfanwy is a key member of Checquy, the last actual secret service in the UK. Its duty is to protect Extreme Variant Abilities (EVAs). EVAs are in hot demand in the world of high-dollar trafficking, because of their supernatural abilities. At first, Myfanwy’s only clue to her identity is a letter in her pocket, which she planted in anticipation of having her memory erased. Once she realizes she’s a highly ranked Checquy official, she must investigate the agency and the reason behind her memory wipe.

Checquy’s head, Linda Farrier (Richardson), is the so-called “King.” Although she is Myfanwy’s ally and mentor, she has to do what she can to keep the agency a secret, and she’s got some things of her own that she’d rather keep hidden, too.

As Checquy “Queen” to Farrier’s King, Conrad Grantchester (Lester) delves into the Myfanwy mystery. Although he is Farrier’s deputy, he does challenge her role within the agency.

Checquy’s American counterpart is the U.S. Bureau of Variant Affairs. After hearing about the Millennium Bridge incident, operative Monica Reed (Munn) travels to London to investigate the deaths, and among the casualties is BVA agent Marcus Kevler (Roberts), her former lover.

Acting as the “hive mind,” Gestalt is made up of four siblings who share a single consciousness. Although to the world, Robert (Raftery), Eliza (Steadman), and twins Alex and Teddy (Fletcher) seem to be four different people, they are just one which increases their import as agents.

The Lugat is an elaborate crime syndicate, headed by Lorik (McElhatton). Among his men is charismatic and crazy Peter Van Syoc (Atsma), who winds up at the center of the Millennium Bridge incident.

It seems Myfanwy has abilities that were dormant, until now. As she digs for the truth about herself, she will have to decide whether she ought to return to her old life or, take this chance at a new start and life on her own terms.

Series Finale:
Episode #8 — Chapter 8
Myfanwy and Farrier quickly discover how dangerous life is outside of the Checquy, while Grantchester runs out of options; Myfanwy chooses between her freedom and Farrier’s life.
First aired: August 18, 2019.


What do you think? Do you like The Rook TV series? Should this Starz TV show have been cancelled or renewed for a second season?

I’ve been waiting for the next season with great anticipation. I’m very disappointed To hear that the show was canceled as of November 2020. That had to have been a mistake!! I would like very much to see it revived, if not on STARZ, then on another network.

I loved this, its different, the actors were great. I would love to see a season 2

STARZ butchered a great book. The show is horrible. I couldn’t even get through one season. They may or may not cancel the show. I will not be watching to find out.

Well, then I am lucky having not read the book cuz I just loved the show 🙂

I Love this show, I would Love another season

I love the show. It’s very original and I love how well it is done. Please renew it for another season.

This series is great original and has me wanting more. It should be renewed Fira second season if the material is there to keep it as good as it is