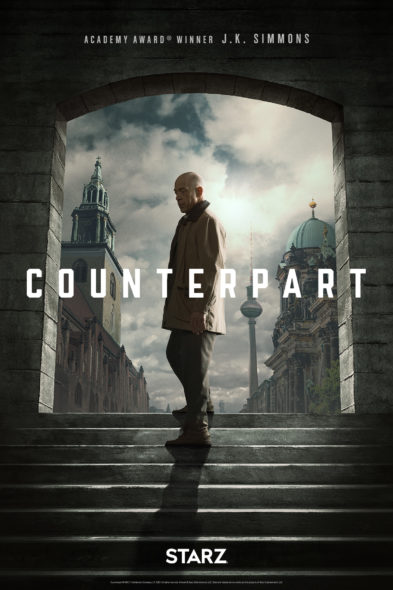 TV show description:
A sci-fi espionage drama from creator Justin Marks, the Counterpart TV series delves into an enigmatic reality which everyday living conceals. The story centers on low-level bureaucrat, Howard Silk (Simmons), who toils away in relative obscurity at a United Nations spy outfit based in Berlin, Germany.

After uncovering evidence that his agency is protecting a secret about traveling to a parallel dimension, Howard’s whole life changes. He soon plunges headlong into a strange world fraught with peril and treachery.

In that other dimension, the only person Howard dares trust is his own counterpart. Meanwhile, Howard’s wife, Emily Burton Silk (Williams), has secrets of her own that may well connect to everything. Likewise, the mysterious Clare (Boniadi), may prove key to what is truly going on.

Howard’s isn’t the only one dragged into the intrigue. His director, Peter Quayle (Lloyd), also gets caught up and finds his double life is wreaking havoc with his meticulously plotted career.

Overseeing Counterintelligence at Howard’s agency is Aldrich (Thomsen). This seasoned operative is one part philosopher and one part spy.

Ian Shaw (Pinnock) has the unenviable responsibility of keeping the peace between the two dimensions. Finally, there’s Baldwin (Serraiocco). Her life, as well as her work as an assassin, takes on a whole new significance, once she comes into contact with the other side.

Counterpart wonders, “What if our lives could have been different?” From that angle, the thriller examines the concepts of identity, fate, and opportunity lost.

What do you think? Do you like the Counterpart TV series? Should this Starz TV show have been cancelled or renewed for season three?

STARZ… Please DON’T cancel Counterpart!! It fills our need for really great, interesting drama with that sci-fi edge. A parallel world opens the scientific theory and imagination! Great writing and great acting… I really don’t want to lose this show!

Best series I have seen in a long time. Definitely worthy of renewal.

I was hoping for a 3rd season. How could a show this great, scored high on Rotten Tomatoes for both seasons suddenly come to an end?

This excellent, thought provoking show is certainly worthy of renewal for another season. To not do otherwise would be very disappointing and a capitulation to TV forces promoting more mindless drivel. I guess I’ll have to retreat to PBS Masterpiece and Hallmark—not a problem but I was expecting more of STARZ.

What a disappointment to have such a good show canceled. With all the junk we have passing for entertainment being repeated over and over again. When a show challenges the viewer to work a little to stay involved in the plot it is canceled. Says quite a bit about the average viewer as much as the show’s producers.

One of the best, most original and compelling shows ever filmed. What a shame to cancel such a piece of art.

Counterpoint is one of the best new series to come in a long time, it draws the viewer into the plot and makes them think and it would be a shame to be canceled.