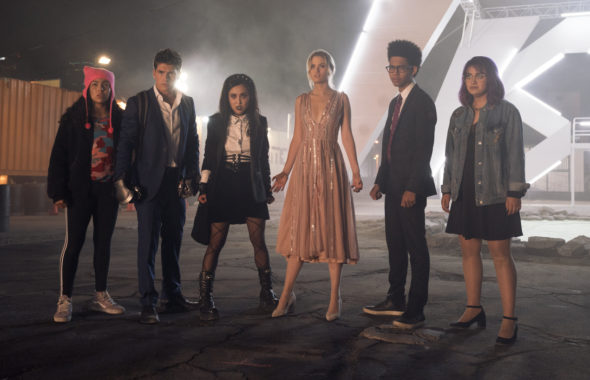 Is Marvel’s Runaways returning or not? According to Deadline, Hulu is close to renewing the TV show for a third season.

We’re really happy with the performance of Runaways, both creatively and in terms of its performance, and we’ll have an announcement shortly.”

From executive producer Chelsea Handler, Marvel’s Tigra & Dazzler Show centers on the “politically progressive Tigra and Dazzler as they try to get their superpowered heads, hands and hearts around life in the City of Angels.”

Marvel’s Hit-Monkey comes from Josh Gordon and Will Speck and “tracks a pissed off Japanese snow monkey who tries to take on and take down Tokyo’s crime underworld with the ghost of an American assassin by his side.”

And lastly, Marvel’s M.O.D.O.K. “centers on a supervillain with ego and family issues.” Patton Oswalt and Jordan Blum serve as executive producers.

Here’s more information via a press release from Hulu:

Hulu has entered into a new partnership with Marvel Television, one of the most renowned global brands in entertainment, to create four new Hulu original adult animation series based on popular Marvel Television characters Marvel’s M.O.D.O.K, Marvel’s Hit-Monkey, Marvel’s Tigra & Dazzler Show and Marvel’s Howard The Duck. Joining Hulu’s vast collection of animated content, the four originals will culminate in a special, Marvel’s The Offenders.

Marvel’s M.O.D.O.K. centers around an egomaniacal supervillain with a really big head and a really little body, who struggles to maintain control of his evil organization and his demanding family. Writers Jordan Blum and Patton Oswalt will also executive produce along with Jeph Loeb.

Marvel’s Hit-Monkey tells the tale of a wronged Japanese snow monkey, mentored by the ghost of an American assassin, as he cuts a wide swath through the Tokyo underworld in this darkly cinematic and brutally funny revenge saga. Writers Josh Gordon and Will Speck will executive produce along with Jeph Loeb.

Marvel’s Tigra & Dazzler Show is a story about two woke superheroes and best friends, Tigra and Dazzler, as they fight for recognition among powered people who make up the eight million stories in Los Angeles. Writers Erica Rivinoja and Chelsea Handler serve as executive producers along with Jeph Loeb.

Marvel’s Howard The Duck is trapped in a world he never made, but America’s favorite fighting fowl hopes to return home with the help of his unstoppable gal pal Beverly before the evil Dr. Bong can turn him the crispiest dish on the menu. Writers Kevin Smith and Dave Willis will also executive produce along with Jeph Loeb.

Marvel’s The Offenders, is a story in which nobody asked them to — and we’d be better off if they didn’t — but MODOK, Dazzler, Tigra, Hit Monkey and Howard the Duck are all forced to team up in order to save the world and certain parts of the Universe. Jeph Loeb will executive produce.

What do you think? Are you a big Marvel fan? Are you looking forward to Hulu and Marvel’s new partnership?