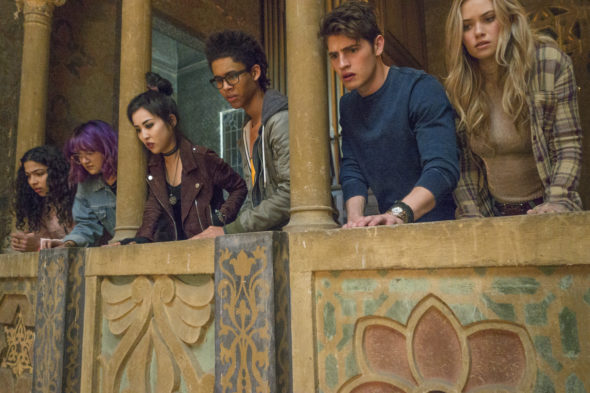 How long will the runaways be on the run? Has Marvel’s Runaways TV show been cancelled or renewed for a second season on Hulu? The television vulture is watching all the latest TV cancellation and renewal news, so this page is the place to track the status of Marvel’s Runaways, season two. Bookmark it, or subscribe for the latest updates. Remember, the television vulture is watching your shows. Are you?

Unless they decide to publicize its viewership, it is hard to predict whether Hulu will cancel or renew Marvel’s Runaways for season two. Flying blind, I expect this TV series will score a second season. Since that’s just speculation, I will keep an eye on the trades and update this page with breaking developments. Subscribe for free alerts on Marvel’s Runaways cancellation or renewal news.

What do you think? Do you hope Marvel’s Runaways TV series will be renewed for a second season? How would you feel if Hulu cancelled this TV show, instead?

target audience is meant for kids, which is not always the case with Marvel series. Let’s all keep in mind that Marvel was intended for children. So if there is no blood and death involved, don’t get your panties in a wad. Kids need to be entertained too. I am a mature adult and I appreciate clean TV every now and then. For those calling for it to be cancel, lighten the fu** up. We are turning into a society that’s ok with the Kardashians but anything that’s produced without major violence is unacceptable. Weird.

The WORST !!! Why would anyone go to the trouble of trying to follow this moronic story line? This show is an insult to all things Marvel. So many better projects that would be so much more enjoyable.

Maybe because they enjoy the show? It’s not for everyone but I thoroughly enjoy it and hope it gets renewed. If you don’t, just don’t watch.

Mildred Richardson
Reply to  Love it

Love that show love anything marvel puts out plz bring it back!!

Its a superhero show and also a CW style romance show with people dating, cheating etc, but it doesn’t do any one thing very well. Episode 7 and I still don’t have a draw. I’m watching incase it actually figures itself out and gets better.

The show had my attention when I heard James Marsters was in the cast. I am sure I am one of the older viewers, but I really do enjoy it. I certainly am for a second season. It deserves that.

I can only wonder why you would stick with it. I understand Vampire Diaries went several seasons, but just because they can pour out more episodes, I have to wonder if they should. Please imagine your heartthrob Masters in a better show which is to say practically any show imaginable would have to be better.

I’ve watched 5 episodes and I think I’m done. It’s not totally horrible but it’s far from being anything amazing. It does seem to have it’s loyal viewers but from what I can tell, it’s audience is rather limited. I definitely won’t have a meltdown if it gets cancelled.

I agree and the same loyal viewers would be rewarded by a better show to earn their same loyalty.

Just because you don’t like it doesn’t mean it needs to be canceled.