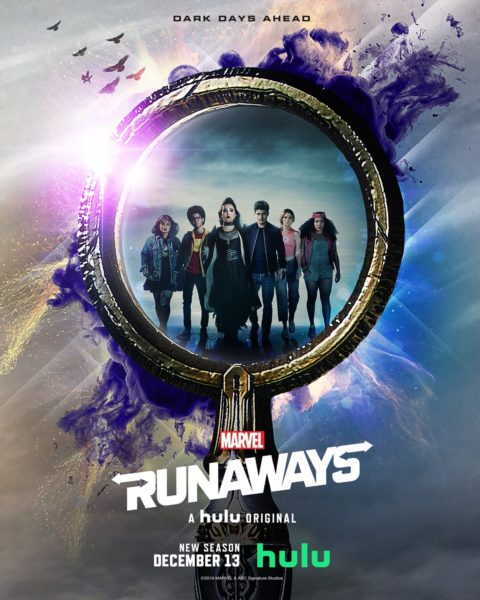 Another live-action Marvel series bites the dust. Hulu has announced that Marvel’s Runaways TV show won’t have a fourth season. Season three, comprised of 10 episodes, will end the series and be released on Friday, December 13th. Hopefully, it won’t leave fans of the show with a cliffhanger.

Marvel’s Cloak & Dagger series was recently cancelled on Freeform after two seasons. The main characters from that show, Tandy Bowen (Olivia Holt) and Tyrone Johnson (Aubrey Joseph), will have their final appearance on Runaways in a crossover event.

Here’s information about the third season and a trailer:

Alongside the trailer and key art, Hulu announced that its fan-favorite series Marvel’s Runaways will return for its third and final season giving the fans what they’ve been waiting for. After evading corrupt parents, battling powerful aliens and coming face-to-face with the world’s most powerful sorceress, the conclusion to this epic saga will leave no stone unturned.

Marvel’s Runaways will return on Friday, December 13th with all 10 episodes.

Synopsis: In an action-packed Season 3, the Runaways frantically search for their captured friends Chase, Gert, and Karolina. The kids go head to head with an unstoppable enemy who has targeted Leslie — or more accurately, the child she’s carrying. Nico draws them all into a dark realm where its ruler Morgan le Fay, played by Elizabeth Hurley, is much more nefarious than anyone the kids have yet to face.

Marvel’s Runaways is executive produced by series showrunners/writers Josh Schwartz and Stephanie Savage (The O.C. and Gossip Girl), along with Jeph Loeb (Marvel’s Agents of S.H.I.E.L.D, Marvel’s Cloak & Dagger) and Quinton Peeples. Marvel’s Runaways is a co-production with ABC Signature Studios, part of Disney Television Studios. It is based on the Marvel comics created by the award winning-team of Brian K. Vaughan and Adrian Alphona.

What do you think? Have you been watching the Marvel’s Runaways TV show on Hulu? Are you sorry to hear that there won’t be a fourth season?

I also enjoyed watch Runaways, this was another very good Marvel show. I wish it would have kept going ☹️