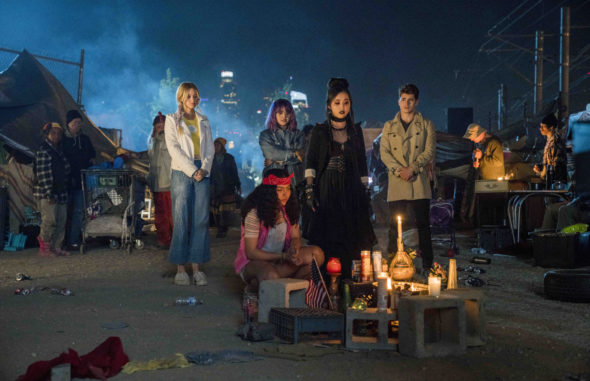 Does Marvel have another runaway hit on its hands? Is Marvel’s Runaways TV show cancelled or renewed for a third season on Hulu? The television vulture is watching all the latest TV cancellation and renewal news, so this page is the place to track the status of Marvel’s Runaways, season three. Bookmark it, or subscribe for the latest updates. Remember, the television vulture is watching your shows. Are you?

A Hulu superhero drama, Marvel’s Runaways stars Rhenzy Feliz, Lyrica Okano, Virginia Gardner, Ariela Barer, Gregg Sulkin, Allegra Acosta, Annie Wersching, Ryan Sands, Angel Parker, Ever Carradine, James Marsters, Kevin Weisman, Brigid Brannagh, James Yaegashi, Brittany Ishibashi, Kip Pardue, and Julian McMahon. The series centers on six Los Angeles teens who reunite, after a catastrophe, only to discover their parents are hiding a dark secret. In the second season, the kids have to learn to live on their own and use their powers to combat PRIDE.

Unless they decide to publicize its viewership, it is difficult to predict whether Hulu will cancel or renew Marvel’s Runaways for season three. Flying blind, I think a third season is more likely than not. Netflix and Marvel have parted ways, so Hulu would be smart to capitalize on the built-in MCU fanbase looking for new TV content. Once Disney (which owns Marvel) aquires 21st Century Fox in 2019, the company will own a majority stake in Hulu so they’ll have a bigger interest in keeping the streaming service going. I will update this page with breaking developments. Subscribe for free alerts on Marvel’s Runaways cancellation or renewal news.

3/24/19 update: Hulu has renewed Marvel’s Runaways for a third season.

What do you think? Are you glad that the Marvel’s Runaways TV series has been renewed for a third season? How would you feel if Hulu had cancelled this TV show, instead?

I love marvel, and enjoyed the runways and I’m 60 years old

This show is the sole reason I switched streaming providers! I don’t understand why they make viewers wait an entire year between seasons? If viewership is lacking, it’s for that reason as the show itself is great for viewers of all ages and always leaves one wanting more!

This show is amazing and unique enough to keep me coming back for more and I’m a bit finicky. Please renew for many more seasons!

Renew the show! I absolutely loved it!!

I love the show Marvel Runaways and hope not only for a season 3 but for many more seasons to come.

I love marvel’s runaways I hope they don’t cancel