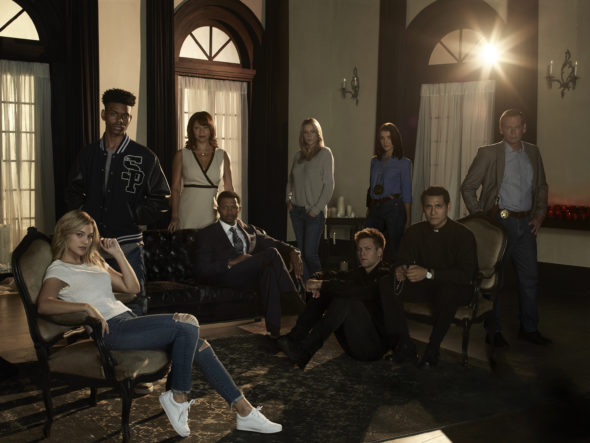 Seemingly out of nowhere, Tandy and Tyrone start exhibiting superpowers. While she can emit daggers of light, he is able to engulf others in darkness.

Once upon a time, Tandy led a life of privilege. That was all washed away though, by the catastrophic storm that destroyed her family and upended her existence. Now an older teen, when she meets Tyrone, it sparks big changes.

A townie, Liam (Lundstedt) is a thoroughly decent guy, if a bit rough around the edges. He’s usually Tandy’s co-conspirator, and more or less her boyfriend. He’s not without his aspirations, and Tandy figures prominently in them.

Tough, but optimistic, Tandy’s mother Melissa (Roth) is not short on love for her daughter. She’s battling her own demons though, and now she must find a way to adapt to her new life.

When he was younger, Tyrone desperately wanted to prove his bravery, but when he lost everything, fear seeped into his soul. He has long kept his own counsel, but meeting Tandy shakes up everything.

Tyrone’s over-protective mother, Adina (Reuben), puts everything she has into giving Tyrone the best she can. Sometimes though, she just forgets to show him she loves him.

Meanwhile, his father, Otis (Mussenden), is a man living with suppressed grief. Still, he puts one foot in front of the other to provide for his family and keep them happy. He wants his boy to grow up to be a man.

Then there’s Father Delgado (Zevallos). A priest and school counselor, he is always there for Ty. Father Delgado is always searching for redemption but is afraid he doesn’t deserve it. He still struggles with living the life to which he is committed and is better with words than deeds.

Similarly, there’s Detective Connors (Evermore), another study in contradictions. He is inclined to intimidate, likely because of the secret he is hiding.

Finally, there is Detective Brigid O’Reilly (Lahana). A New Yorker, she holds herself a bit apart from her counterparts in Louisiana. Despite being women well used to living and working in a man’s world, Brigid has no interest in being one of the guys.

Tandy and Ty share a mysterious connection and soon find they’re better together than alone. The problem is, they are developing feelings which make everything just a little bit more complicated than it already was. For now though, it seems the only constants in their lives are danger and each other.

Series Finale:
Episode #20 — Level Up
Tyrone and Tandy head to the Loa dimension to stop the evil force threatening New Orleans, and they confront the personal issues that have been holding them back; Mayhem and Evita do their best to hold off the dangers in the real dimension.
First aired: May 30, 2019.

What do you think? Do you like Marvel’s Cloak & Dagger TV series? Should this Freeform TV show have been cancelled or renewed for a third season?

Love the show. Alway excited to see the next season.

Loved this series! Hope they give it a go for Season 3!

I agree with you

Keep give is a another season it was amazing

my favorite show…. best in years