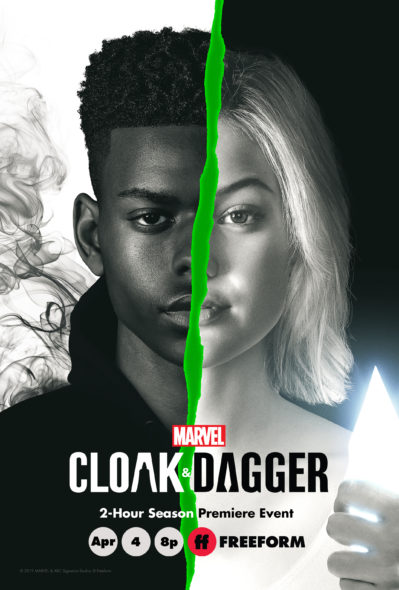 Tandy and Tyrone are closer than you think. Today, Freeform announced the second season of Marvel’s Cloak & Dagger TV show will debut on Thursday, April 4, 2019 at 8:00pm. The duo returns in a big way, with a two-hour season premiere episode. The network also released the Cloak & Dagger season two key art poster (see above).

Check out this excerpt from the Freeform press release to learn more.

Critically acclaimed series “Marvel’s Cloak & Dagger”
is the story of Tandy Bowen (Olivia Holt) and Tyrone Johnson (Aubrey
Joseph)—two teenagers from very different backgrounds who find themselves
burdened and awakened to newly acquired superpowers, which are mysteriously
linked to one another. The only constants in their lives are danger and
each other. Tandy can emit light daggers and Tyrone has the ability to
control the power of darkness. They quickly learn they are better together
than apart.

Premiering on THURSDAY, APRIL 4, at 8:00 pm EST/PST with a two-hour episode, season two
turns the heat up on our young heroes as Tyrone and Tandy try to find their
place as more active heroes in this world. As they learn and grow
emotionally, so will their skills. In season one, we saw Tandy and Ty dip
their toes into the world of hopes and fears; this season, they will dive
deeper into this metaphysical pool. With enhanced powers and a decision to
make about the type of heroes they want to be, they make the choice to run
into the danger, head first. They tackle a heartless vigilante and uncover
an evil that’s been preying on the young women of the city, as the show
takes on more serious topics like gang violence and human trafficking.

What do you think? Are you excited for the second season of Marvel’s Cloak & Dagger TV series? Do you plan to tune in for the Freeform season premiere?

My God they renewed this for third season how disgusting. Oh yes is talk about drugs sex alcohol in a very terrible manner. Oh yeah that’s today that’s what kids want to hear oh wonderful!? Not really but the networks say it is then who cares what we think. the network are always right, but really they don’t care either all they care about is getting a certain type of demographic to watch their garbage forever and beyond when he has 0.01 demographic and low rating. Regardless of how bad.