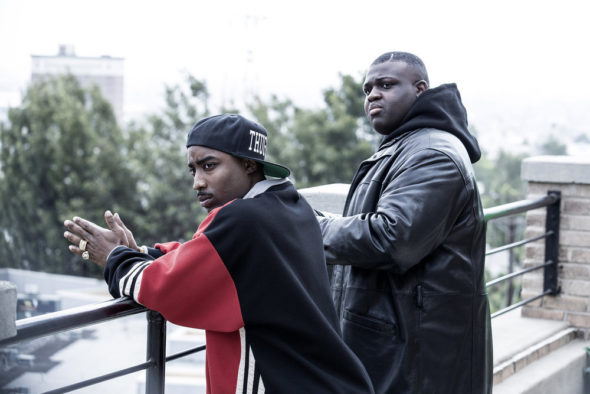 What’s the real story? Has the Unsolved TV show been cancelled or renewed for a second season on USA Network? The television vulture is watching all the latest cancellation and renewal news, so this page is the place to track the status of Unsolved, season two. Bookmark it, or subscribe for the latest updates. Remember, the television vulture is watching your shows. Are you?

A USA Network true-crime anthology drama, Unsolved stars Josh Duhamel, Jimmi Simpson, Marcc Rose, Wavvy Jonez, Dominic L. Santana, Scott Michael Campbell, Michael Henry, and Jamie McShane. The first season is entitled, Unsolved: The Murders of Tupac and The Notorious BIG. It is based upon the Greg Kading book, Murder Rap: The Untold Story of the Biggie Smalls & Tupac Shakur Murder Investigations by the Detective Who Solved Both Cases. Unsolved asks the question: “How can a case this famous still be unsolved?” It delves behind the news headlines to get at the truth beneath the conspiracy theories.

The first season of Unsolved averaged a 0.38 rating in the 18-49 demographic and 962,000 viewers. Check out how Unsolved stacks up against other USA Network TV shows.

Will USA cancel or renew Unsolved for season two (with a different mystery)? The ratings have been very good for a USA series so I think this series will be renewed. I’ll update this page with breaking developments. Subscribe for free Unsolved cancellation or renewal alerts.

What do you think? Do you hope the Unsolved TV show will be renewed for a second season? How would you feel if USA Network cancelled this TV series, instead?

Please notify me when Unsolved: The Murders of Tupac and The Notorious B.I.G. – Season 2 is coming out.

Yes please renew unsolved with Tupac and biggie a new story line to go after that hasn’t been done yet 2 po AC vs the media and government and Hollywood and what he was doing to try to fix it all and those who didn’t want that also the fact he could be a political prisoner.free Tupac!

I think they should have the second season