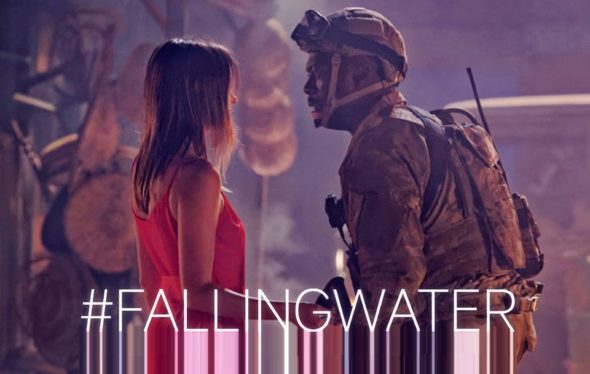 Is the dream nearly over? Has the Falling WaterTV show been cancelled or renewed for a third season on USA Network? The television vulture is watching all the latest cancellation and renewal news, so this page is the place to track the status of Falling Water, season three. Bookmark it, or subscribe for the latest updates. Remember, the television vulture is watching your shows. Are you?

The second season of Falling Water averaged a 0.09 rating in the 18-49 demographic and 349,000 viewers. Compared to season one, that’s down by 33% and down by 24%, respectively. Check out how Shooter stacks up against other USA Network TV shows.

Despite low ratings, USA renewed Falling Water for a second season. Then, the cable channel gave season two very little promotion and assigned it a Saturday night timeslot. The ratings have been understandably low. It seems like USA has given up on the series but, perhaps they’ve just lowered their expectations. I suspect that Falling Water will be cancelled and will update this page with any new information. Subscribe for free updates on any Shooter cancellation or renewal news.

What do you think? Were you hoping that the Falling Water TV show would be renewed for a third season? Are you sorry that USA Network cancelled this TV series, instead?

So into it I would pay big for season 3

Devastated there’s no further series!! Just finished watching 1 & 2 on Amazon Prime (in the UK)
Would gladly pay to watch more! (Which I would never usually do!)

Very disappointed I’m guessing the American public, and Amazon lack of vision, just don’t understand or know a good show when they have one. With no promotion, I found the show by watching another Amazon production that again wasn’t promoted, and canceled. Is Amazon even worth streaming.

Intelligent and thought-provoking shows seemingly are always cancelled. I’m not surprised but very disappointed. It’s unfortunately that the second season could not have had a bit of closure with its storyline but clearly the writers were expecting a third season. Oh well, I thoroughly enjoyed binge-watching both seasons over the past two days. Such is the life of virtual entertainment.