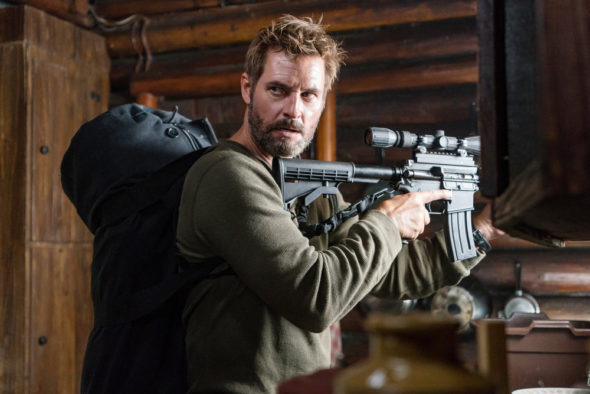 Has the Bowman family’s story come to an end? Is the Colony TV show cancelled or renewed for a fourth season on USA Network? The television vulture is watching all the latest cancellation and renewal news, so this page is the place to track the status of Colony, season four. Bookmark it, or subscribe for the latest updates. Remember, the television vulture is watching your shows. Are you?

A USA Network sci-fi drama, Colony stars Josh Holloway, Sarah Wayne Callies, Tory Kittles, Peter Jacobson, and Alex Neustaedter. The story unfolds in the near-future, in a world where citizens are under military occupation by the Colony Transitional Authority, as part of a larger extraterrestrial invasion. Former FBI agent Will Bowman (Holloway) and wife Katie (Callies) were raising their daughter and two sons in Los Angeles, but were separated from the younger boy during the invasion and pulled out all the stops to get him back. The third season kicks off six months after the season two finale, with Will and Katie rebuilding their family in the world beyond the walls. They soon begin a journey during which they’ll uncover the truth behind the occupation. Once again, this family will find themselves having to choose sides.

The third season of Colony averaged a 0.16 rating in the 18-49 demographic and 665,000 viewers. Compared to season two, that’s down by 37% and 18%, respectively. Check out how Colony stacks up against other USA Network TV shows.

Will Colony cancel or renew Colony for season four? The ratings are way down once again. USA could renew it (they’ve renewed lower-rated shows) but I suspect that Colony is expensive so it will be cancelled instead. For now, I’ll keep an eye on the Nielsens and update this page with breaking developments. Subscribe for free Colony cancellation or renewal alerts.

What do you think? Did you hope the Colony TV show would be renewed for season four? How do you feel now that USA Network has cancelled this TV series, instead?

I wish Netflix or Prime would pick up this Great show. I can’t believe it’s gone. I agree there is too long a break between seasons and people don’t tune back in. But it is definitely a fantastic, well written show.

Please renew colony I can’t beleive it ever got cancelled

Just binged 3 seasons and can’t believe they cancelled this show, especially on a cliff hanger that was finally getting to the real deal. Seriously bad decision on canceling when in was coming into climax of 3 year build up. Dumb asses in charge as usual…

They should definitely put The Colony back!!! This show is so good, it’s worth watching. Please continue with Season 4.

I love the colony how can you leave us hanging!

That’s not fine. They cancelled s04 .I just love “colony” worth watching TV show.i am just I want s04

Why did they cancelled it. Worth watching TV show

Ridiculous. If you want to cancel a show, at least wrap it up! And the reason these ratings get lower is the long time between seasons! People move on. Come on folks get real…great show, don’t wait a year in between seasons and your ratings will be better, also, don’t drag it out so long to see the enemy! Sheesh, stupid.

colony is a great show. I’m so tired of TV stations canceling series just be cause of ratings. what about the millions who were watching colony.. we only mater if its number one. im about ready to stop watching any shows completely because none of them ever run to the end. they all get canceled…

YOU HAVE GOT TO BE JOKING????!!!!! COLONY IS NOT HAVING A FOURTH SEASON??? IT NEVER CEASES TO AMAZE ME THAT EVERY SINGLE TIME I LOVE A SHOW AND REALLY GET INTO WATCHING IT……THEY CANCEL IT!!! MY GOSH!! TALK ABOUT DISAPPOINTING FANS!!! WHAT A ****** WAY TO LEAVE US HANGING!! COLONY IS A GREAT SHOW AND HAS GREAT ACTORS IN IT! ALL I CAN SAY IS WOW!!!

Disappointed they canceled this great show. Especially that they left everyone hanging with the season finale. Netflix come on, you picked up Lucifer when the corporate TV idiots cancelled it, do the same for this great plot!