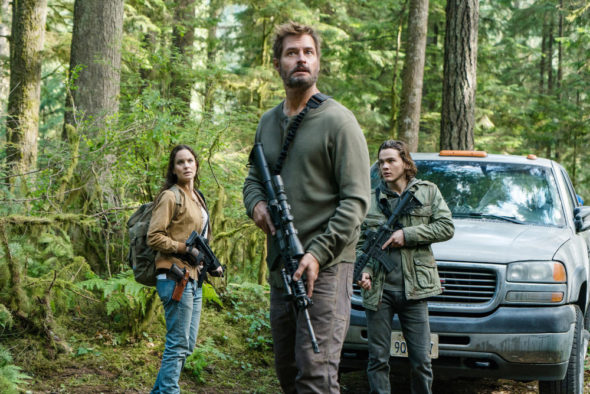 How tightly does the Bowman family stick together during the third season of the Colony TV show on USA Network? As we all know, the Nielsen ratings typically play a big role in determining whether a TV show like Colony is cancelled or renewed for season four. Unfortunately, most of us do not live in Nielsen households. Because many viewers feel frustration when their viewing habits and opinions aren’t considered, we’d like to offer you the chance to rate all of the Colony season three episodes. **Status update below.

A USA science-fiction drama, Colony stars Josh Holloway, Sarah Wayne Callies, Tory Kittles, Peter Jacobson, and Alex Neustaedter. The story unfolds in the near-future, in a world where citizens are under military occupation by the Colony Transitional Authority, as part of a larger extraterrestrial invasion. Former FBI agent Will Bowman (Holloway) and wife Katie (Callies) were raising their daughter and two sons in Los Angeles, but were separated from the younger boy during the invasion and pulled out all the stops to get him back. The third season kicks off six months after the season two finale, with Will and Katie rebuilding their family in the world beyond the walls. They soon begin a journey during which they’ll uncover the truth behind the occupation. Once again, this family will find themselves having to choose sides.

What do you think? Which season three episodes of the Colony TV series do you rate as wonderful, terrible, or somewhere between? Should USA Network have cancelled or renewed Colony for a fourth season? Don’t forget to vote, and share your thoughts, below.

We all want Colony back! This was a excellent series and it’s to bad it was cancelled! What were you thinking cancelling such a great show? Please bring it back. It is very missed!

Colony is a riveting show. Great story, cast, acting. Am bummed it is cancelled.

This is excellent scripted series. Colony cast captivates every emotion the viewers have, keeping us in suspense and wanting to keep watching. Please dont let it end like this after only 3 seasons. Viewers have the right to know what’s next and how earth is concoured or defeated. We binge watched for 4 days straight.The word is getting out that this is a great movie series to watch. GIVE US SEASON 4.