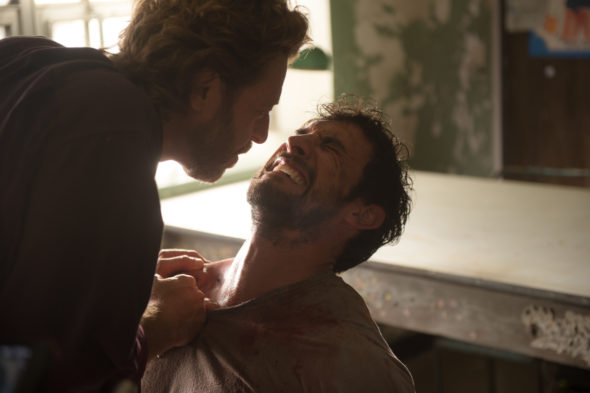 Does the second season of the Six TV show on History live up to your high standards? As we all know, the Nielsen ratings typically play a big role in determining whether a TV show like Six is cancelled or renewed for season three. Unfortunately, most of us do not live in Nielsen households. Because many viewers feel frustration when their viewing habits and opinions aren’t considered, we’d like to offer you the chance to rate all of the Six season two episodes. **Status update below.

What do you think? Which season two episodes of the Six TV series do you rate as wonderful, terrible, or somewhere between? Should History have cancelled or renewed Six for a third season? Don’t forget to vote, and share your thoughts, below.

Amazing series. Extremely realistic and accurate. Best thing on TV. Sorry to see it go. Please bring it back.

I just finished this series! Best show I can’t believe it’s been cancelled! Please bring it back we need to see more!

Such a great show absolutely devastated they are not going to make a third season why would I sure as good as this be cancelled?

Oh my goodness!!!! HOW could you cancel SIX??? The best acting and script!!! With all of the absolute dumbed down shows on tv SIX was an intelligent adult drama.

Absolutely loved this show!!!! So upset there is no season 3. Please reconsider!!! Watched every episode on demand and was so disappointed when I watched the last episode.
Interesting and moving show! Please do season a 3

One of the dumbest things History has done.. at last a show we adults enjoyed!!! And really to end it with family members dead all over the place and leave us hanging…

I absolutely loved watching SIX and am gutted it has been cancelled. Perhaps if it had been on another channel it may have got more viewings.
Also I recorded it and watched one after the other – does this have an impact on the ratings???
It should be renewed – I enjoy watching Seals on Sky1 but SIX is far better and needs to be aired on a better channel. It’s the only thing I’ve watched on the History channel

Loved SIX, work evenings so I would tape and watch at convenience. Highly disappointed that it was cancelled. Somebody please bring it back.

Six is (was) one of our favourite tv shows. We taped and watched every episode so that we never missed it. Thoroughly disappointed in History channel for not renewing 3rd season. Great cast and riveting story lines. Try taking a look at some of the other junk on tv. This show had us on the edge of our seats every time. Couldn’t wait for the next episode to come out. We owe this to the men and women that have fought the fight and continue to do so. So many unsung heroes.

We are SO disappointed SIX was cancelled. As Veterans and a married couple with a ton of friends who are Veterans or still serving. It was so well written. We thoroughly enjoyed the writers ability to take us into the lives of our special forces AND the brave families who SERVE TOO! Frustrated people didn’t get it. It was so well done. Could better advertising have helped? An approach of “see what those who serve endure AND the ones they love at home” ? We sometimes think an advertising blitz might help. ITS NOT the actors fault or the writers.… Read more »

Six was the only show that we watched on history. We never missed an episode! I guess that adult shows are just not acceptable to the History Channel. No more History Channel for us!