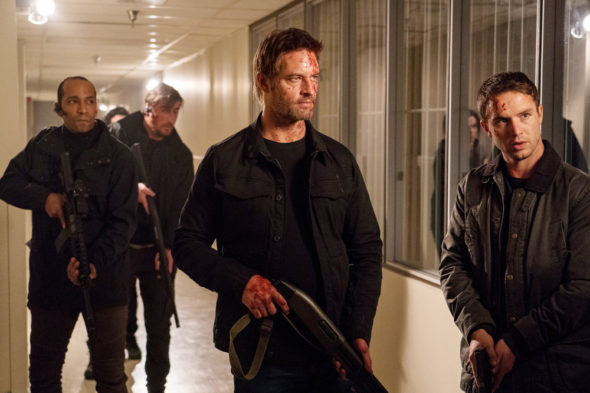 The struggle (and story) of the Bowman family ends tonight. The Colony TV show has been cancelled after three seasons but, would you have watched more episodes and a fourth season? Should it have been dropped?

A USA Network sci-fi drama, Colony stars Josh Holloway, Sarah Wayne Callies, Tory Kittles, Peter Jacobson, and Alex Neustaedter. The story unfolds in the near-future, in a world where citizens are under military occupation by the Colony Transitional Authority, as part of a large extraterrestrial invasion. Former FBI agent Will Bowman (Holloway) and wife Katie (Callies) were raising their daughter and two sons in Los Angeles, but were separated from the younger boy during the invasion and did everything they could to get him back. The third season kicked off six months after the season two finale, with Will and Katie rebuilding their family in the world beyond the walls. They begin a journey during which they uncover the truth behind the occupation. Once again, this family finds themselves having to choose sides.

The show debuted in January 2016 and got off to a positive start with a 0.44 rating in the 18-49 demographic with 1.36 million viewers. The series lost some steam over the course of the season. The first year averaged a 0.38 rating with 1.13 million and it was renewed for a second season.

Season two of Colony launched in January 2017 and the 13 episodes ended up averaging a 0.26 demo rating with 814,000 viewers. Compared to season one, that was down by 31% in the demo and 28% in viewership. Still, Colony was renewed for a third year even before the season two finale aired.

Colony is currently one of USA Network’s lower-rated scripted series but, other shows aren’t doing that much better. While it’s not a complete surprise that USA cancelled Colony, they could have easily renewed it to wrap up the story with a final season. Unfortunately, they opted to end the series after three seasons and 36 episodes.

What do you think? Do you think that USA should have cancelled the Colony TV show? Should the series have been renewed for a fourth (and final) season or, is season three a good place to end it?

What a bummer, why do Netflix show Colony being fully aware off that there is no season 4 ??? Now we have to live with a huge cliffhanger. I know many viewers from Europe also like to see a season 4. Please someone make a season 4

Colony should have been given a season 4 finale! It really sucks to invest time in watching a good program only to have it pulled without an ending. So many TV Series are doing that now days. It’s hard to get people to watch TV series for that very reason. I hope USA would take a chance on making a season 4 Finale.

They must showing you the future of this world , but wouldn’t make them (masters) too happy !

Really disappointed the way colony ends. They should definitely made series 4 in my opinion

yes!!!! Such a great show with a horrible unclosed ending