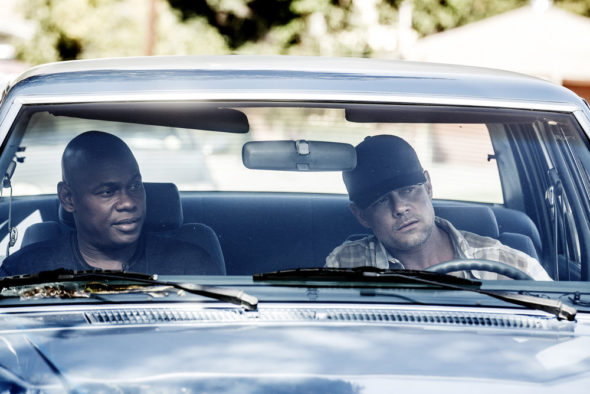 How well do the police unravel the mystery during the first season of the Unsolved TV show on USA Network? As we all know, the Nielsen ratings typically play a big role in determining whether a TV show like Unsolved is cancelled or renewed for season two. Unfortunately, most of us do not live in Nielsen households. Because many viewers feel frustration when their viewing habits and opinions aren’t considered, we’d like to offer you the chance to rate all of the Unsolved season one episodes here.

A USA Network true-crime anthology, Unsolved stars Josh Duhamel, Jimmi Simpson, Marcc Rose, Wavvy Jonez, Dominic L. Santana, Scott Michael Campbell, Michael Henry, and Jamie McShane. The first season is entitled, Unsolved: The Murders of Tupac and The Notorious BIG. It is based upon the Greg Kading book, Murder Rap: The Untold Story of the Biggie Smalls & Tupac Shakur Murder Investigations by the Detective Who Solved Both Cases. Unsolved asks the question: “How can a case this famous still be unsolved?” It delves behind the news headlines to get at the truth beneath the conspiracy theories.

What do you think? Which season one episodes of the Unsolved TV series do you rate as wonderful, terrible, or somewhere between? Should USA cancel or renew Unsolved for a second season? Don’t forget to vote, and share your thoughts, below.

One year ago I was asked to preview this show at Universal Studios in Orlando. We were given a button to push while previewing the unedited version. We answered a multitude of questions, and we asked to give written feedback. I was so impressed at the final product that was episode one. I spent a considerable amount of time reviewing and expressing my opinions. I couldn’t believe that producers followed my opinions to the T. I have previewed this series & it is going to be phenomenal. Keep in mind this is not the type of program that I would… Read more »