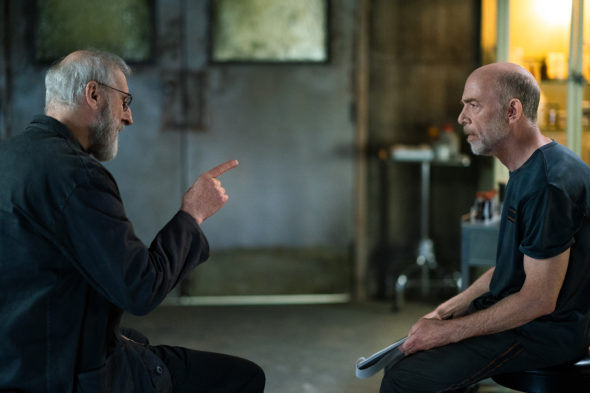 What fate awaits Howard Silk? Has the Counterpart TV show been cancelled or renewed for a third season on Starz? The television vulture is watching all the latest cancellation and renewal news, so this page is the place to track the status of Counterpart, season three. Bookmark it, or subscribe for the latest updates. Remember, the television vulture is watching your shows. Are you?

A Starz science-fiction espionage drama, Counterpart stars J.K. Simmons, Olivia Williams, Harry Lloyd, Nicholas Pinnock, Nazanin Boniadi, and Sara Serraiocco. Exploring themes including identity and fate, the thriller centers on a low-level bureaucrat, Howard Silk (Simmons), who toils away in relative obscurity at a United Nations spy outfit based in Berlin, Germany. After uncovering evidence that his agency is protecting a secret about traveling to a parallel dimension, Howard’s whole life changes. He soon plunges headlong into a strange world fraught with peril and treachery. James Cromwell guest stars in season two as Yanek.

The second season of Counterpart averaged a 0.05 rating in the 18-49 demographic and 223,000 viewers. Compared to season one, that’s down by 48% and 40%, respectively. Learn how Counterpart stacks up against other Starz TV shows.

Will Starz cancel or renew Counterpart for season three? I’d like to think that it will get a third season renewal. The ratings were very low but have been starting to climb. I will keep an eye on the Nielsens and update this page from time to time. Subscribe for free alerts on any

2/11/2019 Status Update: Counterpart has been cancelled by Starz, but the producers are shopping it to other networks. Details here.


What do you think? Did you hope the Counterpart TV show would be renewed for season three on Starz? Would you follow it to another network or streaming service? Sound off in the comments.

Yeah, just discovered it on Prime like so many other posters, would love to see a 3rd season!

I just discovered this show on Prime and binged it over a week or so. I would love to see a 3rd season..they cant leave us hanging like this..this show is so unique and deserves another season..I would love to watch it on any service if it comes back. Stars should reconsider and I’d actually subscribe to that service if it meant watching a 3ed season..please someone make another season..Amazon maybe

I would love to see another season. Sure hope it gets picked up.

I love this show just discovered it on Prime, I hope someone picks up a 3rd season

Starz cancelled Counterpart because they said it was “too male” and they wanted to cater more specifically to woman as a “woman’s premium network”. I kid you not! Once again Liberalism destroys what it touches.

bring back Counterpart!!! its the only thing decent and real that was on TV!!! it was awesome!!!

Please bring back Counterpart!! i love that show!

im 42 yrs old, my son is 23….we have a typical father/son relationship with its ups and downs….over the past 23 years, believe it or not this show was 1 out of 3 or 4 shows that actually bonded us tighter and more united cause it was like we had something more than the norm or monotony to share and discuss… rewind to 2019 (Counterpart cancelled) …..saw my boy on average maybe once or twice a month….easily the least i’ve ever seen my son in 23 years. fast forward to about a month ago, he moved out of state with… Read more »