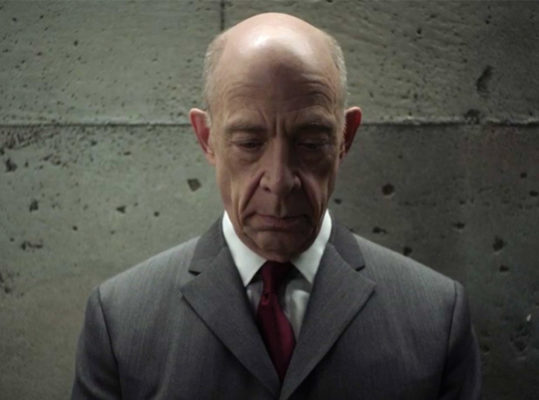 Counterpart was a great show, we had great partners in MRC and Justin is a great writer, but it was a very complicated show, a very male show. We had picked that show up and made a two season commitment before we’d honed in on this premium female strategy.”

What do you think? Have you seen Counterpart? Would you have watched a third season?

I am a woman. I loved counterpart! It was a unique concept the acting was top-notch, and the cast was also top notch. I am sorely disappointed that it has been canceled. I hope the network reconsiders or some other network picks it up! J K Simmons awesome!

Too male???? There are two female leads as well as a 3rd and 4th who are important to the series. There is diversity in this series as well.

Excellent NOT too male show! It’s complicated, intelligent, well written, well acted, and thought provoking especially in our pandemic new world. If all of that is “too male”, I’m actually offended as a female. Please renew on another network! If another network picks up, should advertise that STARZ dropped show for being “too male” to disparage the competition!

Great show. I suppose Starz had too many good compelling shows already with…what? The plot would nedd help moving forward considering a pandemic is difficult to write about but if they were to quickly contain it then it could allow for another round of espionage. Want a good storyline to start from? Pull the five best “theories” of how tge show will continue and have the writer interview them for an assistant to help writer move tge story in new fresh direction. I thimlnk shows should do this anyway to keep stories from being too formulaic.

I really liked Counterpart. It was a great show. Can’t believe Starz canceled it! Please…another channel should pick it up…I’ll switch and watch it on another channel.

It was the first Starz show that seemed interesting in a long while. I guess I’m not in their target audience. Counterpart required the viewer to think and analyze and evaluate. Too cerebral for audiences these days. Not enough brainpower left that spends time on TV.