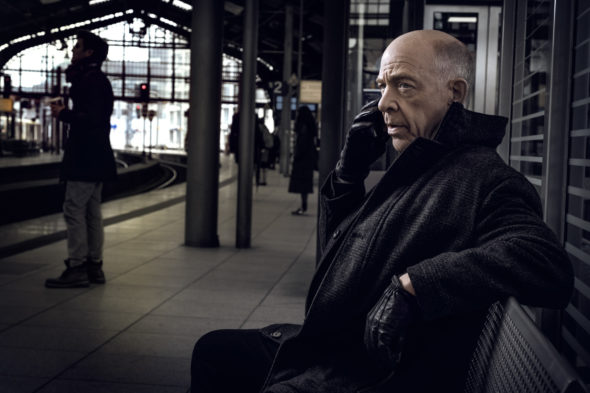 What will become of Howard Silk, not to mention his dimensional counterpart? Has the Counterpart TV show been cancelled or renewed for a second season on Starz? The television vulture is watching all the latest cancellation and renewal news, so this page is the place to track the status of Counterpart, season two. Bookmark it, or subscribe for the latest updates. Remember, the television vulture is watching your shows. Are you?

Airing on the Starz premium cable channel, Counterpart stars J.K. Simmons, Olivia Williams, Harry Lloyd, Ulrich Thomsen, Nazanin Boniadi, Nicholas Pinnock, and Sara Serraiocco. The sci-fi spy drama delves into an enigmatic reality which everyday living conceals. The story centers on a low-level bureaucrat, Howard Silk (Simmons), who toils away in relative obscurity at a United Nations spy outfit based in Berlin, Germany. After uncovering evidence that his agency is protecting a secret about traveling to a parallel dimension, Howard’s whole life changes. He soon plunges headlong into a strange world fraught with peril and treachery.

The first season of Counterpart averaged a 0.09 rating in the 18-49 demographic and 371,000 viewers. Learn how Counterpart stacks up against other Starz TV shows.

Fans don’t have to wonder if Starz will cancel or renew Counterpart for a second season. The cable network originally ordered it with at least two seasons in mind. The series did pretty well in the ratings so there’s no question that the series will return. Subscribe for free alerts on any Counterpart cancellation or renewal news.

What do you think? Do you hope the Counterpart TV show will be renewed for season two? How would you feel if Starz cancelled this TV series, instead?

I think Counterpart is a great series, I wish they wouldn’t consider cancelling it.

absolutely brilliant must be season 2 and beyond

I love the show when is season two starting? Can’t wait!!!

Shades of Rubicon and POI, it is both intelligent and eminently engaging. Well cast and J.K. Simmons as Howard Silk, who brings considerable gravitas to this production is perfect.

Thank you for asking us, the viewers our opinions. I like this series, The Counterpart and I would enjoy seeing a LOT more seasons! Thank you

It is a great show, and I’m thrilled there will be at least a second season, but the way they are showing it destroys any chance of building up quality ratings. You can’t show the newest episode for 3-4 hours straight. It is impossible to get a solid ratings count that way.