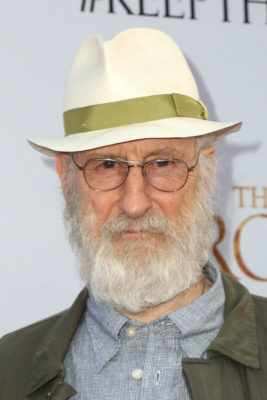 James Cromwell is headed to Starz. Today, the network announced the Young Pope has joined season two of Counterpart.

The sci-fi spy drama centers on a low-level bureaucrat, Howard Silk (JK Simmons), who toils away in relative obscurity at a United Nations spy outfit based in Berlin, Germany. After uncovering evidence that his agency is protecting a secret about traveling to a parallel dimension, Howard’s whole life changes. The cast also includes Olivia Williams, Harry Lloyd, Ulrich Thomsen, Nazanin Boniadi, Nicholas Pinnock, and Sara Serraiocco.

On Counterpart, Cromwell will be playing Yanek, “the enigmatic warden of Echo, an underground facility where Howard (J.K. Simmons) finds himself fighting for his life.” Read more info from Starz below:

Appearing in a multi-episode arc, Cromwell’s character Yanek is the enigmatic warden of Echo, an underground facility where Howard (J.K. Simmons) finds himself fighting for his life.

Born in Los Angeles but raised in New York and educated at Middlebury College and Carnegie-Mellon University, James Cromwell made his television debut in 1974 on “The Rockford Files” and went on to land a recurring role as Archie Bunker’s friend Stretch Cunningham on “All in the Family.” He was nominated for an Oscar(R) for his performance as Farmer Arthur Hoggett in Babe and won an Emmy(R) award for Outstanding Supporting Actor in a Mini-series or a Movie for his role as Arthur Arden in “American Horror Story.” Cromwell has been nominated for multiple Screen Actors Guild and Emmy awards.

“Counterpart” is about a mysterious world hidden beneath the surface of our everyday existence. Howard Silk (J.K. Simmons) is a lowly cog in the bureaucratic machinery of a Berlin-based United Nations spy agency. When Howard discovers that his organization safeguards the secret of a crossing into a parallel dimension, he is thrust into a shadow world of intrigue, danger and double-cross… where the only man he can trust is his near-identical counterpart from this parallel world. The show explores themes of identity, fate and lost love, posing the eternal question, “what if our lives could have been different?”

Love Cromwell and he will make an excellent addition to a unique and brilliant show.

This is one intriguing show. It keeps you trying to figure out who can you trust. What is going to happen next. James Cromwell is a great addition to the awesome J K Simmons. I’m hooked, can’t wait for season two.