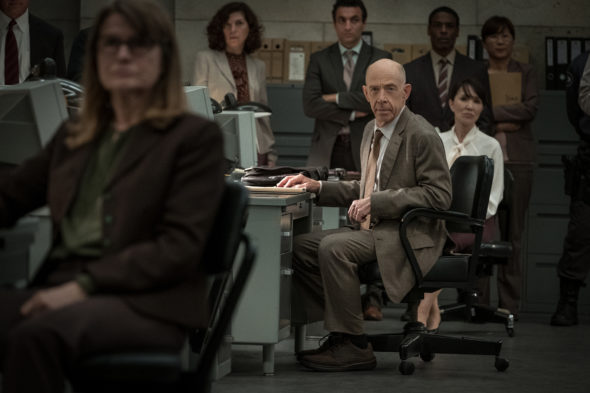 Does Howard Silk fight the good fight during the second season of the Counterpart TV show on Starz? As we all know, the Nielsen ratings typically play a big role in determining whether a TV show like Counterpart is cancelled or renewed for season three. Unfortunately, most of us do not live in Nielsen households. Because many viewers feel frustration when their viewing habits and opinions aren’t considered, we invite you to rate all of the Counterpart season two episodes for us. **Status update below.

A Starz sci-fi spy drama, Counterpart stars stars J.K. Simmons, Olivia Williams, Harry Lloyd, Nicholas Pinnock, Nazanin Boniadi, and Sara Serraiocco. Exploring themes including identity and fate, the thriller centers on a low-level bureaucrat, Howard Silk (Simmons), who toils away in relative obscurity at a United Nations spy outfit based in Berlin, Germany. After uncovering evidence that his agency is protecting a secret about traveling to a parallel dimension, Howard’s whole life changes. He soon plunges headlong into a strange world fraught with peril and treachery. James Cromwell guest stars in season two as Yanek.

What do you think? Which season two episodes of the Counterpart TV series do you rate as wonderful, terrible, or somewhere between? Should Counterpart have been cancelled or renewed for season three? Don’t forget to vote, and share your thoughts, below.

Please renew Counterpart for Season3 . This is an amazing show and it’s not just for guys!!!

I found Counterpart to be intensely interesting, provocative, and engaging; more so than anything else I’d watched, including another favorite, Westworld. While things like The Good Place, etc., are nice, Counterpart was the whole enchilada: Excellent writing, insanely spot on acting in every single role, complex plot lines, all combined in an eerie post-anti cold war setting. Both of us in this household ate it up. WE WANT SEASON THREE!

When it came to the old days of three t.v. Networks, they would plan prime time programs guided by the belief that: ‘No One Thinks After 6:00’. Not to sound harsh, but it seems today that fewer people think at all! Counterpart requires a good deal of thought to grab hold of and then hang on. I’d hate to imagine that after only two seasons it hadn’t gleaned enough of a fan base to carry it into Season 3? If you enjoy something that offers a plot line far beyond ‘See Tom Run’ and are not watching, then please jump… Read more »

Love love Counterpart!!! Please renew for third season. It is by far the best show on tv.

Best show on TV. Every episode is amazing.
We watch them over and over again. Brilliant actors like
J K Simmons, Olivia
Williams, Harry Lloyd actually the entire cast give It their all. Please renew for a Third Season plus many more.

+1 for a third season, it’s one of best TV show currently!

StarzCounterpart is an amazing show!!!
The writing is excellent and the story very intriguing. The actors are all equally great! If the writing remains at this high level, consider another season (3) or two. This is what great TV is all about.
Everyone that I’ve turned on to this show enjoy this as well and are now on board for the full ride.

-If nothing else; a two hour movie to close the series and tie up all the great plot lines.